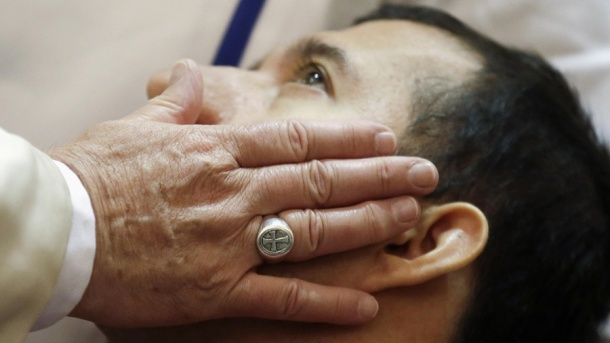 Following the mass in St. Francis Square yesterday, Pope Francis had lunch in the Caritas Soup Kitchen with a group of homeless persons and refugees living in the Caritas Centre, which aims to provide basic assistance to those who have nowhere else to go. He also spent a few moments of private prayer in the tiny, undecorated chapel adjacent to the dining room. After lunch at the Caritas soup kitchen, the Pope visited the Hermitage of the Carceri (Prisons) at Mount Subasio, five kilometres from Assisi and at an altitude of eight hundred metres, surrounded by forests. There he visited the grotto where St. Francis had retreated in order to devote himself to contemplation, and the small chapel dedicated to Mary, Mother of the Lord, where Francis and his peers gathered to pray together. The visit lasted around half an hour; the Holy Father was welcomed by the Franciscan religious community and prayed in St. Francis' grotto. From there, he transferred by car to the cathedral of St. Rufino to meet with the clergy, consecrated persons and members of the pastoral council of the diocese. In this cathedral is the font where St. Francis and St. Clare were baptized, and the Pope mentioned this, emphasizing the importance of the memory of baptism, “our birth as children of the Mother Church”. In his address, the pontiff spoke about the most important aspects in the life of the diocesan community and referred to the Synod that its members are about to commence. The first issue he considered was the Word of God. “The Church is this”, said the Pope: “the community that listens, with faith and love, to the Lord who speaks. … It is the Word of God that engenders faith, that nourishes and regenerates it. The Word touches hearts, converts them to God and to His reasoning, which is so different from ours”. But “it is not enough to read the Sacred Scriptures, it is necessary to listen to Jesus Who speaks through them. We need to be antennae that receive, that tune in to the Word of God. It is the Spirit of God that brings the Scriptures alive, that allows them to be understood in depth, in their true and full sense”. The second aspect is that of “walking. It is one of the words I like best when I think of the Christian and the Church. But for you it has a particular meaning – you are about to embark on a diocesan synod, and 'synod' means to walk together. I think this is truly our most beautiful experience: to be part of a community of people who walk together, throughout history, alongside the Lord, who walks among us. We are not isolated, we do not walk alone, but rather we are part of Christ's single flock, which walks united. And here, when I think of you priests – and allow me to include myself among you – I ask, what is more beautiful for us than being able to walk with our people? … united, without breaking away, without nostalgia for the past. And while we walk, we speak, we get to know each other, we grow together as a family”. Finally, the third aspect is to go out into the peripheries and proclaim. “This is an element I experienced a lot when I was in Buenos Aires: the importance of reaching out towards others, in the peripheries”, in a geographical sense, and “above all, people in special life situations … marginalized and disregarded human lives. These are people who we perhaps find physically close to the 'centre' but spiritually distant”. “Do not be afraid of going out towards these people, to these situations. Do not allow yourselves to be obstructed by prejudices, habits, mental or pastoral rigidity, the famous 'it's always been done this way'! But you can reach the peripheries only if you carry the Word of God in your heart and walk with the Church, like St. Francis. Otherwise we only take ourselves with us, not the Word of God, and this is not good, it is not useful to anyone. We do not save the world ourselves; it is the Lord Who does this”. VISIT WITH THE POOR CLARES CLOISTERED COMMUNITY 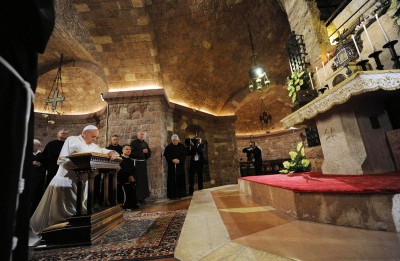 Shortly after 4:15 p.m. the Pope reached the Basilica of St. Clare, where the cloistered nuns of the order founded by St. Clare, friend of St. Francis, reside. The pontiff descended into the crypt to venerate the body of the saint and then, in the chapel of the choir, prayed before the cross of St. Damian, which according to tradition spoke to St. Francis, telling him to repair His house. In this chapel the Pope, accompanied by the Council of Cardinals, met with the cloistered nuns and spoke with them without a prepared text, beginning, “I thought that this meeting would be like the ones we have held twice at Castel Gandolfo, alone with the nuns but, I have to confess, I don't have the courage to send the cardinals away. Let us all remain together”. “When a cloistered nun consecrates her life to the Lord, a transformation occurs that we do not usually understand. Normally we assume that this nun becomes isolated, along with the Absolute, alone with God; it is an ascetic, penitent life. But this is not the path of a Catholic or indeed Christian cloistered nun. The path always passes via Jesus Christ. Jesus is the centre of your life, of your penance, of your community life, of your prayer, and also of the universality of prayer. And therefore, what happens is contrary to what we imagine of an ascetic cloistered nun. When she follows the path of contemplation of Jesus Christ, the path of prayer and penance with Jesus Christ, she becomes greatly human. Cloistered nuns are called upon to have great humanity, a humanity like that of the Mother Church; to be human, to understand all aspects of life, to be able to understand human problems, to know how to forgive and to pray to the Lord for others”. “Today during Mass, speaking of the Cross, I said that Francis had contemplated it with open eyes, with open wounds, with flowing blood. And this is your contemplation: reality. The contemplation of Christ's wounds! This is why it is so good when people attend the visiting room of a monastery, asking for prayers and talking about their problems. Perhaps the nun does not say anything extraordinary, but her word is inspired by her contemplation of Jesus Christ, because the nun, like the Church, is on a path to becoming an expert in humanity. And this is your path: not too spiritual! When [nuns] are too spiritual, I think of the foundress of the monasteries of your 'rivals', St. Theresa, for example, who when one of her nuns came to her to speak about, oh, about these things, said to the cook, “give her a steak!”. The humanity of Jesus Christ! Because the Word became flesh, God became flesh for us, and this gives you a great, human, beautiful and mature holiness, the holiness of a mother. And this is what the Church wants you to be: mothers. … To give life. When you p 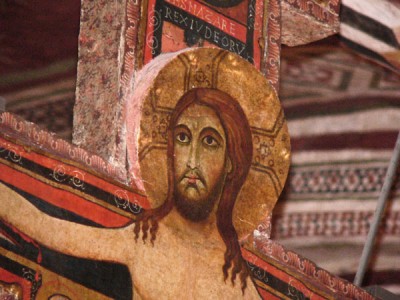 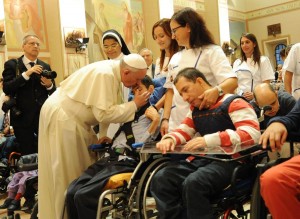 ry men and women. Pope Francis’ historic, highly choreographed visit to Assisi yesterday was filled with evocative symbols and gestures that sent out powerful messages to the whole world.  He used the day in Assisi to offer practical advice to the crowds that gathered to hear him, but also the entire world that peered into this visit:  To feuding newlyweds, he said, “Let the flying dishes fly, but don’t go to bed angry!” During his talk to consecrated persons and members of the Assisi Diocesan Pastoral Council, he called on the clergy to resist giving “interminable and boring homilies where no one understands anything.” And he fondly reminisced about the bygone days when parish priests knew the names of all their parishioners, “and even the name of the dog in each family.” Along the way, it was obvious that Pope Francis gained fresh strength and energy with each new meeting. From his first stop at the Seraphicum Institute, to his final visit to the Rivotorto, which preserves the memory of the little huts where St Francis stayed with his first followers, the day was filled with prayer and song, and marked with the joy and the peace that characterize both the saint and the Bishop of Rome who bears the name of Assisi's favorite son. At each step of his journey, the Pope also made time for quiet moments of prayer and reflection, following in the footsteps of the “Little Poor Man” of Assisi. Pope Francis is certainly not the first pope to visit this tiny, hilltop, Umbrian town, which attracts millions tourists and pilgrims each year. More than a dozen popes have come over the centuries.  Blessed John Paul II alone visited six times. But expectations had been extremely high for the pilgrimage of the Argentinian Pope who first startled the Church and the world when he announced upon his election on March 13 of this year that he would take the name of this most beloved saint who is known for his poverty, simplicity, joy and connection with all people. Centuries ago, it was from the wooden cross in the little chapel of San Damiano that Francesco Bernardone received his marching orders to "Go and repair my house," "Go, rebuild my Church." The chapel had been falling into ruin.  "Repair" and "rebuild" referred to the fact that the little chapel had a foundation that had already been in place for a while.  It was not about starting from scratch as much as it implied to build on what was already there, fortify and strengthen it, and clean it up so that it will last into the future and be an inviting place for all who seek refuge, solace and peace. Yesterday, Francisco of Buenos Aires travelled to Assisi, accompanied by his little group of advisors and counsellors, to be confirmed in their mission to repair and rebuild the Lord's house, weather-beaten and leaking here and there, yet still built on a solid foundation.