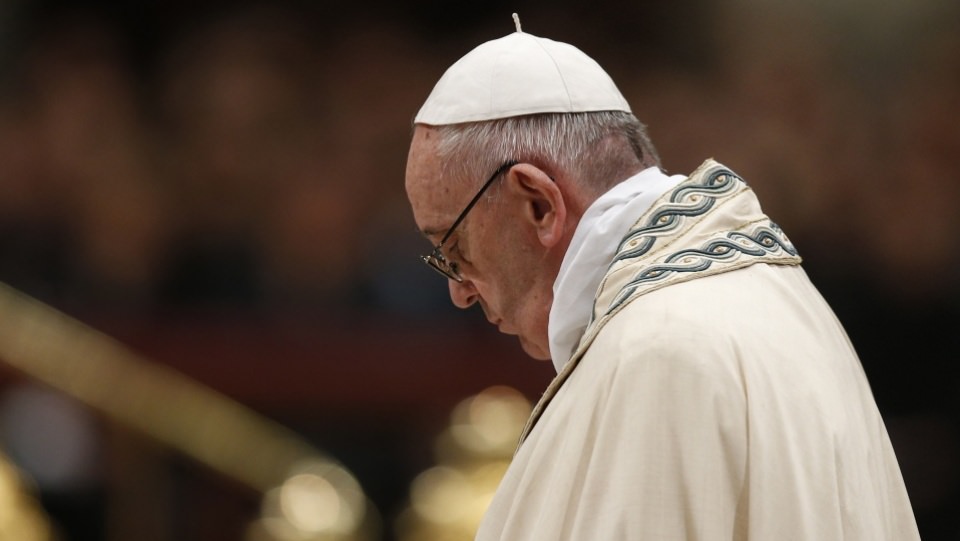 CNS/Paul Haring
Pope Francis at Angelus – January 1, 2018 A "horizon of peace" for migrants and refugees During his midday Angelus prayer on New Year's Day, Pope Francis urged that refugees, migrants and everyone be ensured a future of peace, saying it is everyone's right. Pope Francis on New Year’s Day raised his voice on behalf of migrants and refugees to appeal to the international community not to extinguish their hopes and stifle their expectations for peace. “I wish once again to be the voice of these brothers and sisters who call for a horizon of peace for their future,” Pope Francis said in his midday Angelus address on New Year’s Day, a day on which the Church observes the World Day of Peace. The theme of this year World Day of Peace is, “Migrants and Refugees: Men and Women in search of Peace.” The Holy Father released his message for this day on 24 November. “It is important that all, civil institutions, educational, welfare and ecclesial bodies are committed to ensuring for refugees, migrants and everyone a future of peace,” the Pope said in Italian, addressing a vast holiday crowd gathered in St. Peter’s Square below the window of the papal studio. Mary's Faith On New Year’s Day, the Catholic Church celebrates the liturgical Solemnity of the Mother of God. Before the Angelus prayer, Pope Francis reflected on the day’s Gospel of the shepherds visiting the Child Jesus after the announcement by the angels, which, the Pope said, Mary meditated deeply in her heart. The Pope said Mary’s faith “widens” her motherhood and makes her the first disciple of her Son, Jesus. This, the Pope said, is an invitation for each one of us to pray contemplating and tasting the gift of Jesus himself. The Holy Father explained how Mary’s faith “provokes” the first miraculous “sign” of Cana, arousing the faith of the disciples. “With the same faith, at the foot of the Cross Mary receives the Apostle John as a son; and finally, after the Resurrection, she becomes a prayerful mother of the Church on which the Holy Spirit descends with power on the day of Pentecost.” Mary Intercedes For Us Pope Francis pointed out that as a mother, Mary has a very special role of placing herself between her Son and people in their situations of privation, poverty and suffering. In her motherly instinct, she intercedes and presents to her Son the needs of the people, especially the weakest and most disadvantaged. The Pope said, “it is precisely to these people that the theme of the World Day of Peace is dedicated: "Migrants and Refugees: men and women seeking peace". Peace, A Right Pope Francis said peace is “the right of all,” and migrants and refugees “are willing to risk their lives on a journey that in most cases is long and dangerous, to face hardships and suffering.” He urged that during the new year, all work with “generosity to create a more supportive and welcoming world.” While entrusting all to the Mother of God, Pope Francis invited then to pray for the cause of migrants and refugees. He recalled that old Russian monks and mystics used to say that during times of spiritual troubles, it was necessary to gather under the mantle of the Holy Mother of God. With the many troubles of today, especially those of migrants and refugees, the Pope prayed: “We seek refuge under your protection, Holy Mother of God. Do not despise our supplications amidst our trials but deliver us from every evil, Oh glorious and blessed Virgin.”