Historic Meeting of Two Popes at Castel Gandolfo Speaking exclusively to Vatican Radio, the Director of the Holy See Press Office, Fr. Federico Lombardi S.J., reveals the details of this morning’s historic encounter between Pope Francis and Benedict XVI, Pope Emeritus, an encounter he has described as a moment of profound and elevated communion: 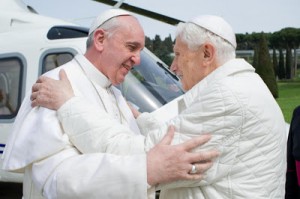 “The helicopter landed in Castel Gandolfo heliport, at about 12:15 and the car with the retired Pope approached the helicopter landing site. The Holy Father alighted: he was accompanied by the Substitute [Secretary of State] Msgr. Becciu, by Msgr. Sapienza and Msgr. Alfred Xuereb. As the Pope alighted, the Pope Emeritus approached him and there was a moving embrace between the two. Then, there followed brief greetings with those other present - the bishop of Albano and the Director of the Pontifical Villas, Mr. Petrillo – they all got in the car: Pope Francis on the right, the place reserved to the Pope, and the Pope emeritus on the left. Msgr. Georg Gänswein, who is Prefect of the Papal Household, travelled in the same car. And so, the car brought the two protagonists of this historic meeting to the elevators and they went up to the apartments and immediately went to the chapel for a moment of prayer. In the chapel, the Pope emeritus offered the place of honor to Pope Francis, but he said: "We are brothers," and wanted them to kneel together in the same pew. After a short moment of prayer, they then went to the private library where, at about 12:30, the private meeting began. This is the Library where the Pope normally receives important guests in Castel Gandolfo. Pope Francis brought a beautiful icon as a gift for the Pope emeritus. It was an icon of Our Lady of Humility, as a gift for Benedict XVI's great humility. Their discussions ended at 13.15, lasting about 45 minutes. 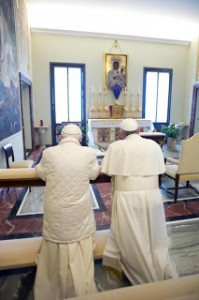 It should be noted, with regard to the clothing, which actually - as we mentioned earlier - the Pope emeritus wears a simple cassock white, without a sash and without a mantella: these are the two details which distinguish his clothing from that of Pope Francis who wears a mantella and sash. The two Secretaries, and Msgr. Georg and Msgr. Xuereb, ate lunch with them.  The Pope Emeritus accompanied Pope Francis to the heliport and Pope Francis left for the Vatican at 14.42. Let us remember that this is not their first meeting: it is their first face-to-face meeting, but Pope Francis had many times already addressed his thoughts to the Pope emeritus, during his first appearance on the central Loggia, and then two personal calls: the night of his election and St. Joseph’s Day. Thus, the dialogue had already started, even though the the personal, physical meeting had not yet taken place. Let us also remember that the retired Pope had already expressed his unconditional reverence and obedience to his successor at his farewell meeting with the Cardinals, February 28, and certainly in this [morning’s] meeting - which was a moment of profound and elevated communion –will have had the opportunity to renew this act of reverence and obedience to his successor, and certainly Pope Francis renewed his gratitude and that of the whole Church for Pope Benedict’s ministry during his pontificate”. 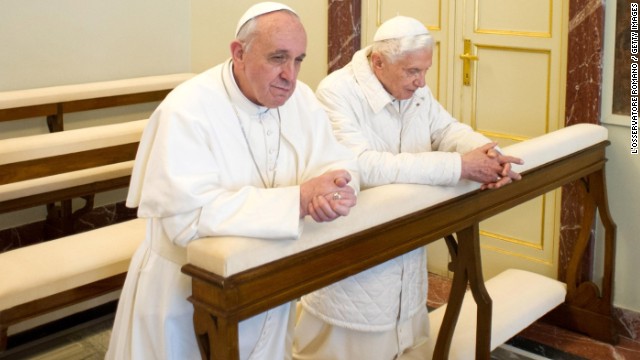 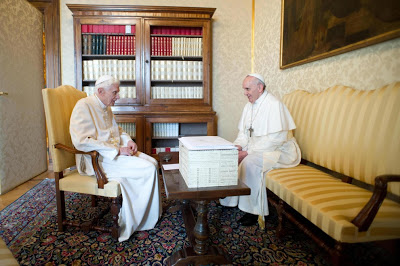