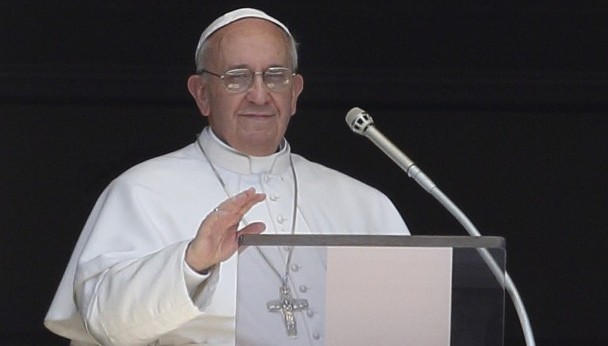 To say that the election of Cardinal Jorge Bergoglio as pope was a surprise is an understatement. Since his name was announced on the balcony of St. Peter's square March 13, there has been great interest in what he has to say and teach on matters of the faith.
There are several sources of information about Pope Francis' teachings and views on the faith and related issues. Both his papal homilies and in his homilies and teachings as Archbishop of Buenos Aires have much to reveal, as do two recently published books that feature book length interviews with then-Cardinal Bergoglio.
One theme that appeared in recent papal homilies was evil and the devil. It prompted one papal enthusiast to tweet “what's up with that?”
In the book “Sobre el Cielo y la Tierra” (On Heaven and Earth) written by Cardinal Bergoglio and Rabbi Abraham Skorka in 2011, he discussed the issue of evil. The then-cardinal said satan was simply a being who rejected God's plan and tries to convince others that God's plan is not necessary.
However, he cautions against making assumptions that anytime a person does something inappropriate it is because they are “pushed by the demon.” Cardinal Bergoglio says  “man can be tempted, but that doesn't mean we should demonize him.”
In the book Cardinal Bergoglio tells Rabbi Skorka that the devil's greatest trick is perhaps convincing people he does not really exist. How then, does one identify when one is being tempted?
Pope Francis has provided a bit of a how-to manual in some of his recent homilies. Looking through those homilies it appears the devil has a vast array of tactics can come in many forms including:
-        the belief that there is nothing one can do in the face of evil
-        pessimism: convincing us that problems are insurmountable
-        gossiping: it seems harmless, but according to Pope Francis, "When one prefers gossiping, gossiping about another, it's like clobbering another. This is normal, it happens to everyone, including me -- it is a temptation of the Evil One." He made the statement in his homily during morning Mass at Domus Sancta Marta on April 9.
-       putting oneself at the centre of one's life instead of God
Essentially Pope Francis has said there are a series of small things that seems insignificant, but add up to the devil sneaking his way in to our hearts. One should be on guard against all of these seemingly minor instances. In the 201 book-length interview "El Jesuita" by Sergio Rubin and Francesca Ambrogetti, then- Cardinal Bergoglio gives an example of one of these seemingly insignificant instances that one might fight against.
While preparing to leave to catch a train for the outskirts of Buenos Aires where he was to lead spiritual exercises for a group of nuns, Cardinal Bergoglio popped in the Cathedral to pray before the Blessed Sacrament.  As he was leaving the cathedral a young man approached him asking for confession. Cardinal Bergoglio tells Rubin and Ambrogetti the young man was clearly high. Knowing he would miss his train the cardinal told the young man another priest would be arriving shortly. He knew it would be another 40 minutes before the other priest arrived, and he knew the young man wouldn't notice the time because of his altered state. As he was walking away he realized he was giving in to the belief that he was important and his need to catch the train was more important than this young man's need for confession.  Cardinal Bergoglio returned to the Cathedral, told you young man the other priest was delayed, and dealt with the young man himself. When he finally arrived at the train station he was convinced he had missed his train, but it had been delayed and he was still able to catch it and make his way to the convent that was expecting him.
How often do we give in to the easy solutions in a given situation?
----
(CNS Photo / Paul Haring)