Pope Benedict traveled to Turin on Sunday to celebrate Mass, meet with young people and the sick, and venerate the Holy Shroud. 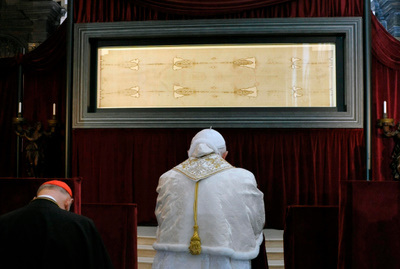 He arrived in St. Charles Square in the Pope Mobile and was received by thousands of pilgrims gathered for the Mass. Before celebrating Mass, the Holy Father was greeted with opening speeches from the Mayor of Turin and Msgr.  Severino Poletto, the Archbishop of Turin. In his homily Benedict XVI referred to the difficulties of living a Christian life, in which context he recalled: "People who live their lives in truly precarious conditions, because of lack of work, uncertainty about the future, physical and moral suffering. I am thinking of families, of young people, of the elderly who often suffer solitude, of the marginalised, of immigrants", he said. The Pope encouraged families "to experience the Christian dimension of love in simple everyday activities, in family relationships, overcoming division and misunderstandings, in cultivating the faith which makes communion ever stronger". He particularly encouraged young people "never to lose hope, the hope that comes from the risen Christ, from God's victory over sin, hatred and death". Turning his attention then to the Holy Shroud of Turin, the Pope highlighted how in the Shroud:

... we see, as if reflected, our own sufferings in the suffering in Christ. ... For this reason the Shroud is a sign of hope. Christ faced the cross in order to place a limit to evil, in order to make us see, in His Easter, the anticipation of the moment in which, for us too, every tear will be wiped away and there will no longer be death, mourning, lamentation or fatigue.

Benedict XVI concluded by encouraging the faithful of Turin:

...to remain firm in the faith you have received, the faith that gives meaning to life, that gives the strength to love. Never lose the light of hope in the risen Christ, which is capable of transforming reality and making all things new; in a simple and concrete way in the city, in neighbourhoods, in communities, in families, live the love of God: 'love one another as I have loved you'.

Following Mass, and before praying the Regina Coeli, the Pope noted how the Virgin Mary is venerated in Turin as Our Lady of Consolation. Later in the Day Pope Benedict met with over 20,000 young people  of the Archdiocese of Turin and surrounding Diocese. Recalling how twenty-five years ago John Paul II wrote a Letter for young people focusing on Jesus' meeting with the rich young man who asked Him what he had to do to gain eternal life, Benedict XVI said:

Today it is not easy to talk about eternal life and things everlasting because the mentality of our time tells us that nothing definitive exists; everything changes, and changes quickly. In many cases, 'change' has become a watchword, ... and in this way you young people are also led to think that it is impossible to make definitive choices that commit you for life. 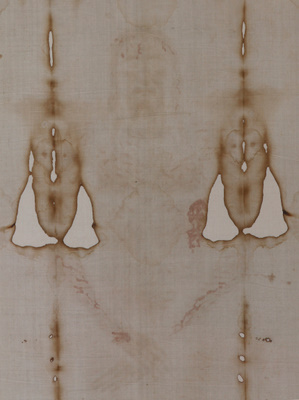 The Pope travelled from St. Charles Square to the Cathedral of Turin to venerate the Holy Shroud. In his meditation on the Shroud the Pope said:

This is the mystery of the Holy Shroud! It was from there, from the darkness of the death of the Son of God, that the light of a new hope shone forth: the light of the Resurrection. And I feel that, looking at this sacred cloth with the eyes of faith, something of this light is perceptible. ... The power of the Shroud is this: from the face of this 'Man of suffering' who bears on himself the passion of men of all times and places, including our passions, sufferings, difficulties and sins, ... there emerges a solemn majesty, a paradoxical lordship".

After leaving the Cathedral, the Pope met with the sick and disabled at the Little House of Divine Providence, also know as the Cottolengo House.  St.  Giuseppe Benedetto Cottolengo founded the House for the needy in the mid 19th century.  The Pope assured the sick people that they have an important mission. "Living your sufferings in union with the crucified and risen Christ, you participate in the mystery of His suffering for the salvation of the world", he said. "Offering our pain to God through Christ, we can share in the victory of good over evil, because God makes our offering, our act of love, fruitful". This visit concluded the Holy Father's trip to Turin, he returned to the Vatican last night by helicopter. - Photos: Top -- CNS photo/L'Osservatore Romano, Bottom -- CNS photo/Paul Haring