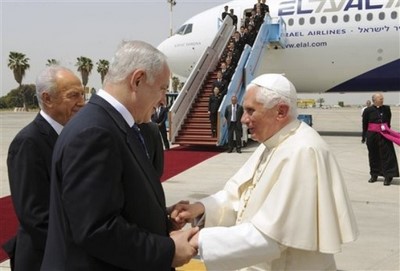 As you may have seen on Salt + Light, or caught in Friday evening's Zoom, Pope Benedict XVI's trip to the Holy Land wrapped up today. His final stop was the Church of the Holy Sepulcher; the location celebrated as the tomb where Christ's body was laid. In an address, he offered special words of encouragement to priests and Bishops serving in the Holy Land, and returned to the theme of hope which has been so prevalent throughout this trip, and his entire Pontificate:

The empty tomb speaks to us of hope, the hope that does not disappoint because it is the gift of the Spirit of life (cf. Rom 5:5). This is the message that I wish to leave with you today, at the conclusion of my pilgrimage to the Holy Land. May hope rise up ever anew, by God's grace, in the hearts of all the people dwelling in these lands! May it take root in your hearts, abide in your families and communities, and inspire in each of you an ever more faithful witness to the Prince of Peace! The Church in the Holy Land, which has so often experienced the dark mystery of Golgotha, must never cease to be an intrepid herald of the luminous message of hope which this empty tomb proclaims. The Gospel reassures us that God can make all things new, that history need not be repeated, that memories can be healed, that the bitter fruits of recrimination and hostility can be overcome, and that a future of justice, peace, prosperity and cooperation can arise for every man and woman, for the whole human family, and in a special way for the people who dwell in this land so dear to the heart of the Saviour.

The Pontiff also reflected on the trip at a farewell ceremony -- sharing highlights, and offering one final push for peace:

... I wish to put on record that I came to visit this country as a friend of the Israelis, just as I am a friend of the Palestinian people. Friends enjoy spending time in one another's company, and they find it deeply distressing to see one another suffer. No friend of the Israelis and the Palestinians can fail to be saddened by the continuing tension between your two peoples. No friend can fail to weep at the suffering and loss of life that both peoples have endured over the last six decades. Allow me to make this appeal to all the people of these lands: No more bloodshed! No more fighting! No more terrorism! No more war! Instead let us break the vicious circle of violence. Let there be lasting peace based on justice, let there be genuine reconciliation and healing. Let it be universally recognized that the State of Israel has the right to exist, and to enjoy peace and security within internationally agreed borders. Let it be likewise acknowledged that the Palestinian people have a right to a sovereign independent homeland, to live with dignity and to travel freely. Let the two-state solution become a reality, not remain a dream. And let peace spread outwards from these lands, let them serve as a "light to the nations" (Is 42:6), bringing hope to the many other regions that are affected by conflict. One of the saddest sights for me during my visit to these lands was the wall. As I passed alongside it, I prayed for a future in which the peoples of the Holy Land can live together in peace and harmony without the need for such instruments of security and separation, but rather respecting and trusting one another, and renouncing all forms of violence and aggression. Mr. President [Shimon Peres], I know how hard it will be to achieve that goal. I know how difficult is your task, and that of the Palestinian Authority. But I assure you that my prayers and the prayers of Catholics across the world are with you as you continue your efforts to build a just and lasting peace in this region.

On Thursday, the Holy Father was in Nazareth, the home of the Holy Family, where he marked the conclusion of the Year of the Family which the Church had launched in the Holy Land. He blessed the first stone of an International Center for the Family to be built in Nazareth, and calling the family the "first building-block of a well-ordered and welcoming society" stressed its importance:

Here, in the example of Mary, Joseph and Jesus, we come to appreciate even more fully the sacredness of the family, which in God's plan is based on the lifelong fidelity of a man and a woman consecrated by the marriage covenant and accepting of God's gift of new life. How much the men and women of our time need to reappropriate this fundamental truth, which stands at the foundation of society, and how important is the witness of married couples for the formation of sound consciences and the building of a civilization of love!

I encourage you to read his wonderful homily delivered on the Mount of Precipice in Nazareth. The Pontiff also had a 15-minute private meeting with Israeli prime minister Benjamin Netanyahu in Israel It has been a successful trip for the Holy Father, and he has been as a promised -- a pilgrim of peace. As with his other Apostolic Voyages, he has also been a messenger of hope. We can only pray for the region and its people, that these seeds of peace and hope take root. - Photo: Israeli Government Press Office