Fifteen thousand priests, 350 bishops and 80 cardinals joined Pope Benedict today in celebrating the closing Mass of the Year for Priests. 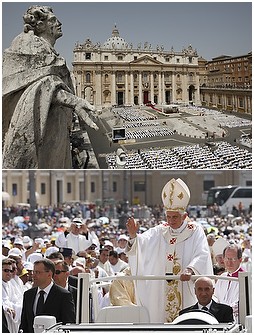 It's the largest concelebration ever held at the Vatican. The Holy Father did not shy away from addressing the clerical sexual abuse scandal in his homily.  He brought it up early explaining that he had called the Year as a time of renewal and reminder that God has given us a great gift in the priesthood.

It was to be expected that this new radiance of the priesthood would not be pleasing to the “enemy”; he would have rather preferred to see it disappear, so that God would ultimately be driven out of the world. And so it happened that, in this very year of joy for the sacrament of the priesthood, the sins of priests came to light – particularly the abuse of the little ones, in which the priesthood, whose task is to manifest God’s concern for our good, turns into its very opposite. We too insistently beg forgiveness from God and from the persons involved, while promising to do everything possible to ensure that such abuse will never occur again ...

The Pontiff also suggested to "look upon all that happened as a summons to purification."  He then continued his homily with a beautiful reflection on the solemnity of the Sacred Heart, highlighting the psalm and antiphons.  See the homily below. At Mass, the Holy Father used a chalice that belonged to St. John Mary Vianney.  The patron saint of parish priests has been the patron of the Year for Priests, which coincides with the 150th anniversary of his death.  The Pope also led priests in a consecration to the Immaculate Heart of Mary.  For a summary of the homily and highlights of the Mass, see the article by Catholic News Service's Cindy Wooden.  For more Vatican resources on the Year for Priests visit HERE. You can also catch an encore presentation of the Mass this evening at 8:00pm ET/5:00pm PT or Saturday, June 12th at 1:00pm ET/10:00am PT.  As always, our network is streaming online HERE.

CONCLUSION OF THE YEAR FOR PRIESTS -- HOLY MASS HOMILY OF HIS HOLINESS POPE BENEDICT XVI Solemnity of the Sacred Heart of Jesus Dear Brothers in the Priestly Ministry, Dear Brothers and Sisters, The Year for Priests which we have celebrated on the one hundred and fiftieth anniversary of the death of the holy Curè of Ars, the model of priestly ministry in our world, is now coming to an end. We have let the Curé of Ars guide us to a renewed appreciation of the grandeur and beauty of the priestly ministry. The priest is not a mere office-holder, like those which every society needs in order to carry out certain functions. Instead, he does something which no human being can do of his own power: in Christ’s name he speaks the words which absolve us of our sins and in this way he changes, starting with God, our entire life. Over the offerings of bread and wine he speaks Christ’s words of thanksgiving, which are words of transubstantiation – words which make Christ himself present, the Risen One, his Body and Blood – words which thus transform the elements of the world, which open the world to God and unite it to him. The priesthood, then, is not simply “office” but sacrament: God makes use of us poor men in order to be, through us, present to all men and women, and to act on their behalf. Continue reading