Perspectives: What is a real man?

This week our Perspectives question of the week was: “What is a real man?” I had significant hesitations with taking this question to the streets not only because I knew men wouldn’t be thrilled to reveal the innermost secrets of their masculine heart on a corner in downtown Toronto (and to a woman, no less), but I was also acutely aware that the topic is, well, a bit delicate and sometimes divisive! 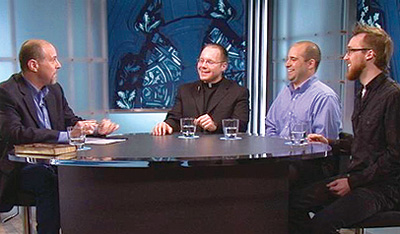 But sometimes in the effort to zone in on truth, we risk being divisive. This concept of division for the sake of truth reminds me of Psalm 149 as found in this morning’s Divine Office: “Let the praises of God be on their lips and a two-edged sword in their hand.” This line brings to mind Truth’s beautifully wielded duality. Truth by its very nature gives glory to God by defining, pruning and sifting through human experiences and naming them for what they are; which can be painful to some because of sins committed against them or because of wounds from their past. The truth is, I was pleasantly surprised that many of the streeters called fatherhood to mind when asked about “real masculinity” also, the words integrity and strength popped up more than I anticipated for a society renowned for its political correctness and its avoidance of anything remotely resembling gender stereotyping. Tonight, our host Pedro Guevara Mann will welcome three men to the show to discuss their perspectives on true masculinity. This exceptionally manly panel is made up of Fr. Chris Valka, a Basilian priest based in Detroit, Jason Gennaro a husband and father of five and Jay Wall a university student and artist. Besides determining the car choices that real men make (mini-vans vs racer bicycles, pick-up trucks and hybrids), the guys offer insightful reflections on the very essence of masculinity. The guys touch upon a whole host of issues such as the sacrificial nature of true masculinity and the question of the Paternity of God and how it is meant to be reflected in men and their relationships with their children. Though human relationships are frequently riddled with inconsistencies and shortcomings, they were fashioned based on God’s perfect blueprint. The guys on tonight’s show talk about how a “real man” aims his life to map onto the example of the Father in Heaven and not does not become discouraged by the world’s demands on masculinity in the meantime. In response to this week’s question, Dorothy Cummings McLean writes:

A ‘real man’ is a sexist social construct meant to shame men into behaviour that might not help in their own, or others', flourishing. St. Joseph stands as a contraction to the egoism and aggression demanded by ‘real man’ stereotypes: he was celibate, he chose to treat the woman the world said had betrayed him with gentleness and mercy, he cared for a child not his own, he worked a tradesman's job despite an exalted lineage, he remained a silent, background figure, and his death went unrecorded by history. And yet he is the patron saint of Canada and has been loved by millions and millions of people for the past two millennia.

It is interesting to note that the majority of Facebook responses came from women whereas the majority of responses to an earlier, similarly slanted question (directed at defining true femininity) also came from women, primarily. This could simply mean that either women are on Facebook way more than men or that maybe women simply feel a stronger need to articulate the differences between men and women! As if on cue, this article in yesterday’s Globe & Mail confirms the former speculation! But both men and women will find this discussion helpful as it is impossible to talk about ‘real men’ without referencing ‘real women’! As Mateo Castano puts it:

I saw a movie called Jesus of Nazareth and Joseph, the husband of Mary, beautifully tells St. Anne that a man is "only half a person" referring to marriage and how it is the complete giving of self to another where a man is fully himself. This of course applies to the admirable vocation of celibacy in priests who also give themselves completely to the Church, in their belongings, obedience, and the foregoing sex on earth for the glory of Christ and His Church in heaven. So a real man is a man that gives himself completely, holding nothing back, just as Jesus did for us on the cross; He is the only standard.

Join us tonight for the weekly edition of Perspectives Friday, April 9th at 7pm and 11pm ET (8 PT), and Sunday April 11th at the same times, for a chance to hear Fr. Chris Valka, Jason Gennaro and Jay Wall articulate their experiences of true manhood and how they try to be faithful to these ideals from within their own vocations.