Papal Decree on Washing of the Feet on Holy Thursday 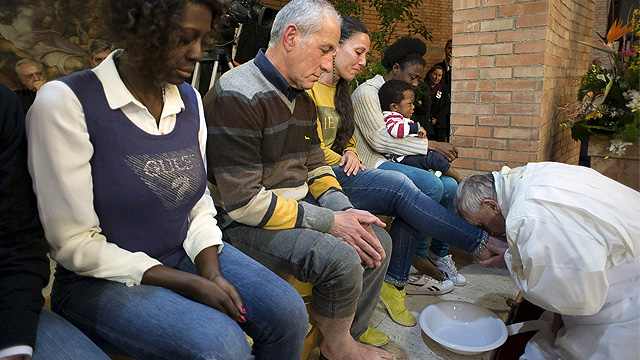 The Pope decrees that not only men may be chosen for the washing of the feet in the Liturgy of Holy Thursday. Please see below for the full text of the decree and for a commentary on the decree by Archbishop Arthur Roche, Secretary of the Congregation for Divine Worship and the Discipline of the Sacraments:

Congregatio de Cultu Divino et Disciplina Sacramentorum
DECREE
The restoration of Holy Week, with the decree Maxima Redemptionis nostrae mysteria (30 November 1955), granted the faculty for the washing of feet of twelve men during the Mass of the Lord’s Supper after the reading of the Gospel according to John, where a pastoral reason recommended it, in order to demonstrate in an almost representative way the humility and charity of Christ towards his disciples.
In the Roman Liturgy this rite was handed down with the name of the Mandatum of the Lord concerning fraternal charity from the words of Jesus (cf Jhn 13:34), which are sung in an Antiphon during the celebration. 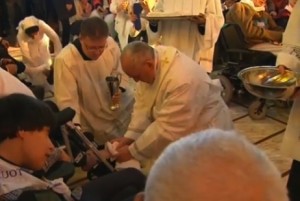 In preforming this rite Bishops and priests are invited to intimately conform themselves to Christ who «came not to be served but to serve» (Mt 20:28) and, compelled by charity «to the end» (Jhn 13:1), to give his life for the salvation of the whole human race.
In order that the full meaning of this rite might be expressed to those who participate it seemed good to the Supreme Pontiff Pope Francis to vary the norm which is found in the rubrics of the Missale Romanum (p. 300 n. 11): «The men who have been chosen are led by the ministers…», which therefore must be changed as follows: «Those who are chosen from amongst the people of God are led by the ministers…» (and consequently in the Caeremoniali Episcoporum n. 301 and n. 299b: «seats for those chosen»), so that pastors may select a small group of the faithful to represent the variety and the unity of each part of the people of God. Such small groups can be made up of men and women, and it is appropriate that they consist of people young and old, healthy and sick, clerics, consecrated men and women and laity.
This Congregation for Divine Worship and the Discipline of the Sacraments, in virtue of the faculties granted by the Supreme Pontiff, introduces this innovation into the liturgical books of the Roman Rite, reminding pastors of their responsibility to adequately instruct both the chosen faithful as well as all others so that they may participate consciously, actively and fruitfully in the rite.
Anything to the contrary notwithstanding.
From the Congregation for Divine Worship and the Discipline of the Sacraments, 6 January 2016, Solemnity of the Epiphany of the Lord. Robert Card. Sarah Prefect 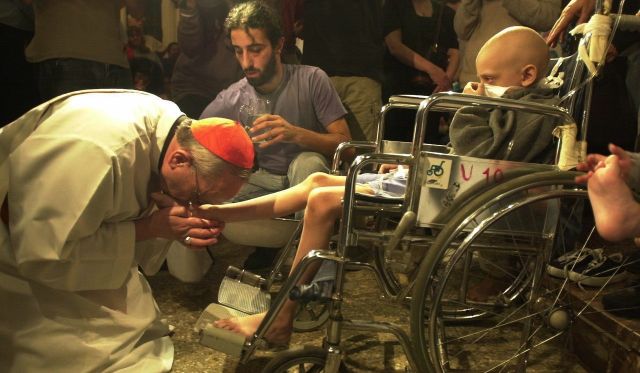 I Have Given You An Example
With the decree In Missa in cena Domini the Congregation for Divine Worship and the Discipline of the Sacraments, at the request of the Holy Father, has readjusted the rubric of the Missale Romanum regarding the washing of feet (p. 300 n. 11), variously linked down the centuries with Holy Thursday and which, from the reform of Holy Week in 1955, could also take place during the evening Mass that begins the Paschal Triduum.
Illuminated by the gospel of John the rite carries a double significance: an imitation of what Christ did in the Upper Room washing the feet of the Apostles and an expression of the self-gift signified by this gesture of service. It is not by accident this is called the Mandatum from the incipit of the antiphon which accompanied the action: «Mandatum novum do vobis, ut diligatis invicem, sicut dilexi vos, dicit Dominus» (Jhn 13:14). In fact the commandment to fraternal love binds all the disciples of Jesus without any distinction or exception.
Already in an old ordo of the 7th century we find the following: «Pontifex suis cubicularibus pedes lavat et unusquisque clericorum in domo sua». Applied differently in the various dioceses and abbeys it is also found in the Roman Pontifical of the 12th century after Vespers on Holy Thursday and in the Pontifical of the Roman Curia of the 13th century («facit mandatum duodecim subdiaconos»). The Mandatum is described as follows in the Missale Romanum of Pope Saint Pius V (1570): «Post denudationem altarium, hora competenti, facto signo cum tabula, conveniunt clerici ad faciendum mandatum. Maior abluit pedes minoribus: tergit et osculatur». It takes place during the singing of antiphons, the last of which is Ubi caritas and is concluded by the Pater noster and a prayer which links the commandment of service with purification from sins: «Adesto Domine, quaesumus, officio servitutis nostrae: et quia tu discipulis tuis pedes lavare dignatus es, ne despicias opera manuum tuarum, quae nobis retinenda mandasti: ut sicut hic nobis, et a nobis exterioria abluuntur inquinamenta; sic a te omnium nostrum interiora laventur peccata. Quod ipse praestare digneris, qui vivis et regnas, Deus, per omnia saecula saeculorum». Enlightened by the gospel which has been heard during the morning Mass, the carrying out of this action is reserved to the clergy («conveniunt clerici») and the absence of an instruction to have “twelve” would seem to indicate that what counts isn’t just imitating what Jesus did in the Upper Room but rather putting the exemplary value of what Jesus did into practice, which is expected of all his disciples.
The description of the «De Mandato seu lotione pedum» in the Caeremoniale Episcoporum of 1600 is more detailed. It mentions the custom (after Vespers or at lunchtime, in a church, a chapter room or a suitable place) of the Bishop washing, drying and kissing the feet of “thirteen” poor people after having dressed them, fed them and given them a charitable donation. Likewise this could be done to thirteen canons, according to the local custom and wishes of the Bishop, who might choose poor people even where it is the practice that they be canons: «videtur enim eo pacto maiorem humilitatem, et charitatem prae se ferre, quam lavare pedes Canonicis». This meaningful gesture of the washing of feet, although not applied to the entirety of the people of God and reserved to the clergy, did not exclude local customs which take into account the poor or young people (e.g. the Missale Parisiense). The Caeremoniale Episcoporum expressly prescribed the Mandatum for cathedrals and collegiate churches.
With the reform of Pius XII which once more moved the Missa in cena Domini to the evening, the washing of feet could take place, for pastoral reasons, during the Mass, after the homily for «duodecim viros selectos», placed «in medio presbyterii vel in ipsa aula ecclesiae»; the celebrant washes and dries their feet (the kiss is no longer mentioned). This now goes beyond the rather clerical and reserved sense, taking place in the public assembly with the direction for «twelve men» which makes it more explicitly an imitative sign, almost a sacred representation, that facilitates what Jesus did and had in mind on the first Holy Thursday. 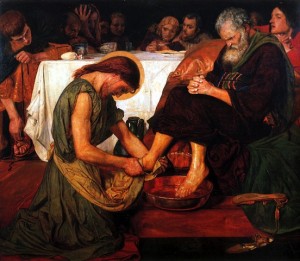 The Missale Romanum of 1970 retained the recently reformed rite, simplifying some elements: the number «twelve» is omitted; it takes place «in loco apto»; it omits one antiphon and simplifies the others; Ubi caritas is assigned to the presentation of gifts; the concluding part is omitted (Pater noster, verses and prayer), as this formerly took place outside of the Mass. The reservation solely to «viri» however remained for mimetic value
The current change foresees that individuals may be chosen from amongst all the members of the people of God. The significance does not now relate so much to the exterior imitation of what Jesus has done, rather as to the meaning of what he has accomplished which has a universal importance, namely the giving of himself «to the end» for the salvation of the human race, his charity which embraces all people and which makes all people brothers and sisters by following his example. In fact, the exemplum that he has given to us so that we might do as he has done goes beyond the physical washing of the feet of others to embrace everything that such a gesture expresses in service of the tangible love of our neighbour. All the antiphons proposed in the Missale during the washing of feet recall and illustrate the meaning of this gesture both for those who carry it out and for those who receive it as well as for those who look on and interiorise it through the chant.
The washing of feet is not obligatory in the Missa in cena Domini. It is for pastors to evaluate its desirability, according to the pastoral considerations and circumstances which exist, in such a way that it does not become something automatic or artificial, deprived of meaning and reduced to a staged event. Nor must it become so important as to grab all the attention during the Mass of the Lord’s Supper, celebrated on «the most sacred day on which our Lord Jesus Christ was handed over for our sake» (i.e. Communicantes of the Roman Canon for this Mass). In the directions for the homily we are reminded of the distinctiveness of this Mass which commemorates the institution of the Eucharist, of the priestly Order and of the new commandment concerning fraternal charity, the supreme law for all and towards all in the Church.
It is for pastors to choose a small group of persons who are representative of the entire people of God – lay, ordained ministers, married, single, religious, healthy, sick, children, young people and the elderly – and not just one category or condition. Those chosen should offer themselves willingly. Lastly, it is for those who plan and organise the liturgical celebrations to prepare and dispose everything so that all may be helped to fruitfully participate in this moment: the anamnesis of the “new commandment” heard in the gospel which is the life of every disciple of the Lord.
+Arthur Roche Secretary of the Congregation for Divine Worship and the Discipline of the Sacraments