There are certain key events that make World Youth Day what it is. There is an all-night prayer vigil, a mass with the Pope, an opportunity for confession, a vocations pavilion, and, of course, catechesis. 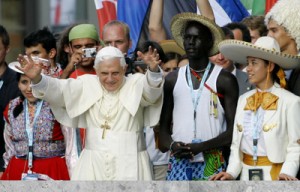 Some elements are variable and up to the Vatican and Holy Father to determine. Today in Madrid, WYD organizers confirmed the “extra” events on Pope Benedict's agenda.
On Friday, August 19th, the Holy Father will be in El Escorial, a town 45 kilometers north of Madrid, for two meetings. First, he will meet with young sisters from the Madrid area, then he will meet with young professors. El Escorial is the site of a palace built by King Philip II in the 16th century to celebrate Spain's victory over France. The heart of the palace is a chapel the size of a cathedral. The kings and queens of Spain are entombed in a room under the high altar. The mausoleum is modeled after the Pantheon. The palace is now a museum and an Augustinian monastery. On Saturday, August 20th, the Pope will celebrate Mass with seminarians in Madrid's Cathedral of Almudena. Later that same day, he will visit the St. John of God Centre. The centre is run by the Hospitaller Order of St. John of God, an order of brothers and priests who run hospitals and care centres. The centre in Madrid has in-patient and out-patient facilities for those with psychiatric issues, a well as services for those with developmental disabilities. After the Mass at Cuatros Vientos airbase, the Holy Father will meet with a group of World Youth Day volunteers before making his way to Barajas airport to depart for Rome.