Our Lady of Lujan 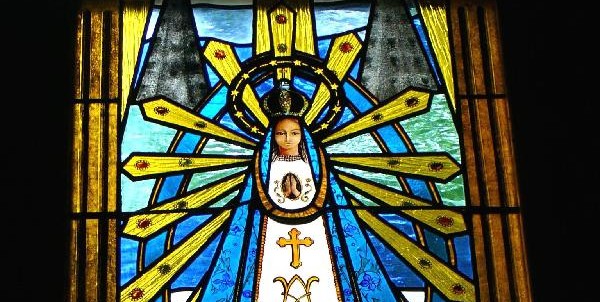 Lujan, Argentina, 1630
– A devoutly Catholic farmer from Portugal arrives in the northern Argentine town of Sumampa, in the province of Santiago del Estero. To his great dismay his faith is not well known or shared in his new hometown.  In order to feel more at home he takes it upon himself to build a small shrine to Our Lady on his property. He writes to a friend in Brazil and asks him to send a small statue of Mary. The friend in Brazil is torn between two options. Not knowing which his friend might like better, he sends both. One is the virgin and child, the other is the immaculate conception. The statues travel by sea and then by horse-drawn cart. At the time there was fighting with the natives, so for safety reasons several horse-drawn carts banded together to travel as a caravan. One night they camp out on the property of Don Rosendo de Oramus. The next morning the carts prepare to continue their journey. One by one the carts start moving...except for one cart. The cart carrying the statues of Our Lady simply refuses to budge. Try as they might the men simply cannot get the horses to start moving. In attempt to get the cart and the caravan moving, the men remove items from the cart. Only when the statue of Our lady of the Immaculate conception is removed do the horses start moving. The other statue - of Our Lady with the child Jesus -stays in the cart and continues on to Sumampa where the Portuguese farmer enshrines it on his property. While the drama of the immovable cart is unfolding, Manuel, a native slave boy, has been standing mesmerized, watching the whole scene. When the carts start moving again Manuel declares that he wants to stay with Don Rosendo as Our Lady’s servant. The arrangements are made and Manuel stays in Lujan. A small shrine is build for Our Lady on Don Rosendo’s property and Manuel happily serves Our Lady until the day that Don Rosendo dies. A rich local woman then offers to give the statue a home in her own personal chapel. The statue is transferred, prayers of welcome are prayed, and the chapel is locked up for the night.

The next morning the statue is gone. A search party goes out looking for the statue and finds it back on Don Rosendo’s property, in the same little shrine it sat in before his death. At first Manuel is accused of stealing the statue and carrying it back to it’s previous home. Eventually it is proven that there is no way Manuel could have gotten into the chapel and made off with the statue. Understanding that something supernatural happened here, Dona Ana goes to see the local bishop to ask for advice. They try transferring the statue again…this time with a solemn procession that includes Manuel in his role as sacristan. The statue stays put. People begin coming to Dona Ana’s chapel to see this miraculous virgin who picked not only her home, but also her her sacristan. Eventually so many visitors come to the shrine that it has to be enlarged. In 1677 the foundation for a new church is laid…and miracles really begin happening. Our Lady tells Manuel when he will die, and tells him that he will be buried at the foot of the altar. Sure enough, on the date indicated by the virgin Manuel dies a holy death. In 1710 one of the priests entrusted with caring for the shrine has a tumor in his throat. He takes some oil from one of the lamps that lights the Our Lady’s shrine and rubs it on his throat. His tumor is disappears. In 1780 news arrives that a large group of Indians are advancing toward Lujan, killing people along the way. The people of Lujan first panic, then turn to Our Lady and pray for her help. While they pray, a thick fog descends upon the town hiding it from the enemy’s sight. The Indians lose their way and end up somewhere else. Lujan is spared. Our Lady of Lujan also saved her people from illness. When a cholera epidemic was sweeping the nation the Archbishop of Buenos Aires prayed to the Virgin of Lujan to help spare the people of his Archdiocese.  He vows to make pilgrimage to Lujan if she helps him. Both the city of Buenos Aires, and the surrounding province are untouched by the epidemic. In 1886 Pope Leo XIII honours the Virgin of Lujan, sending a jewel encrusted gold crown for the statue. Finally in 1904 a new basilica is built for Our Lady of Lujan, where she remains to this day. Her feast day is May 8, and she is recognized as the Patroness of Argentina. Her light blue cape and white dress  mimic the Argentine flag and it is no accident that she is seen as the Virgin with a preferential option for the country's native people - a people too often oppressed or forgotten. --- photo by Dario Alpern