Of Men and Medals

I could hear the roar of the crowd even before I stepped out of my apartment building. The celebration for Canada's final gold medal was in full swing on Yonge Street in downtown Toronto. I could hardly contain my own excitement as I rushed towards Dundas Square, camera in hand, to join the revelry that had shut down traffic in 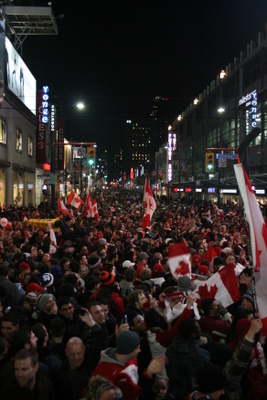 the heart of the city. An impromptu street hockey game greeted me as I stepped into the throng under the bright lights of the square and started snapping. Our humble white and red flag waved from hockey sticks and street posts, adorned beaming faces and flashed across gigantic screens. The crowd was on fire. Canada had achieved two miracles - a nail-biting photo finish in a hockey game against the US, and a record for most gold medals won in a single Winter Olympics. All of this had me thinking about Perspectives' "question of the week": is nationalistic pride un-Christian?
That very question sparked an intense debate among colleagues of mine, some of whom insisted that nationalistic pride fell into the camp of egoistic pride, whereas others understood it to mean patriotism. (Given the immediate cultural context, I fell in the latter group.) To be sure, the question is ambiguous. There is pride and then there is pride. Pride in a job well done is not the same as puffed-up pride, and Canada had certainly accomplished a job well done, starting with Alex Bilodeau, running through Joannie Rochette, and ending with Sidney Crosby's gold-winning goal. CTV anchor Lloyd Robertson commented Sunday in a candid post-games interview that the events of the past two weeks have created a renewed sense of Canadian identity nearly out of thin air: "People have been going home from work saying they want to watch the games... it's bigger than any previous Olympics in Canada, bigger than Expo '67 and Expo '86." Perhaps this pride in our country was really there all along, waiting for something bigger than ourselves to bring us out of our shells. I was certainly one of those who "went home from work wanting to watch the games." Perhaps I'm reading too much into the euphoria of the moment. Time will tell. What I can say is that on the faces of the crowd I didn't find egoistic pride, but certainly patriotism. To be sure, there was plenty of partying going on, smashed bottles on the street and the faint whiff of marijuana in the air, like any instant mass celebration. Yet, alongside drunken frat boys, you could see pockets of people, just... standing, or waving, or chanting themselves hoarse, soaking in the energy of the moment. Celebrating the best of Canada, or at least the best of Canadian celebrity. It might have been a taste of what Vancouver has experienced for the 17-day duration of these games. My family, who all live in the Greater Vancouver Area, have never seen the Olympic city quite like it was for the past two weeks. (I got a Facebook message from my sister saying "I can't believe you would choose to live in Toronto and miss out on the 2010 Olympics. You're missing quite a party!" to which I could only reply, "Grr!") This isn't to say that a superficial party should define Canadian identity. But in one sense the draw of the Olympics is the same thing that draws us to the Church, to Christ, and to live our lives as Christians: the desire for perfection (albeit of a very different sort) and the desire to "finish the race". Cheering on those we meet along the way, encouraging those struggling, working for what is best for others, denying self for a higher purpose. A co-reveler compared the party on the streets to what the Second Coming might feel like. But I digress. Is pride in your nation un-Christian? I wouldn't say so... putting down another nation would be un-Christian, but friendly rivalry is not. As one passerby at the street party commented, "Canada needed this." For a country whose cultural identity (or lack thereof) has been locked in stereotypes, perhaps he was right.