Now, that’s a feather in your cap! 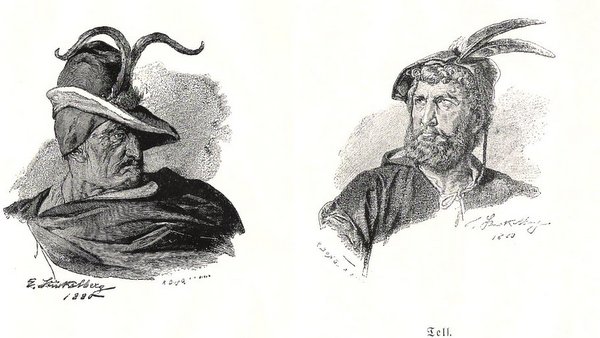 Ever wonder where the idea for feathered caps came from? I recall my mother saying ‘that’s a feather in your cap' to express an accomplishment. But, whenever she said it the first thing that came to mind was a pirate or buccaneer. Later I learnt these nefarious characters stole the idea from the landed gentry, who (according to Wikipedia) were in turn imitating a sporting practice among Scottish and Welshmen where the person who killed the first fowl plucked out a feather and stuck it in his cap. Ok, who really knows where this all originated! But one thing is for sure, this feather thing is not limited to Westerners. Apparently, it’s been customary throughout the ages and in every corner of the globe for warriors to adorn themselves with feathers. On some deep level we all know - More Feathers Is Better. So when Johnny Depp posed as the Lone Ranger’s sidekick Tonto on the cover of Rolling Stone wearing a bird on his head – he was saying: I’m kind of a big deal. And when Pope Francis visited Brazil, locals crowned him with a feathered hat too - cause, you know. 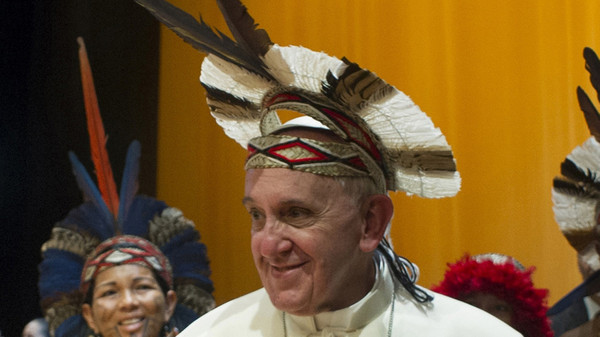 And don’t think we Catholics have been sitting this trend out. Remember your friendly neighborhood Knights of Columbus? You know the guys who wear the swords to funerals and papal visits and stuff. 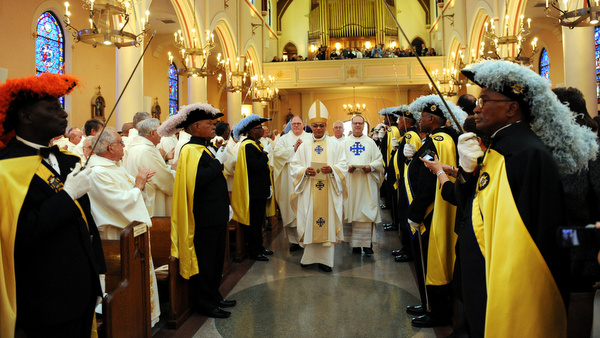 Yes, the guys who are usually volunteering to cover that costly church reno. Well, these guys rock the feathered cap as well, and they too are kind of a big deal. Does this sartorial choice work in a Catholic context? I think it does. If there’s anyone or anything worth feathering your cap for, why not Christ? If stealing some loot or being the first to kill a bird merits a feather in your cap, well, what do you get for saving lives or being persecuted for remaining true to your conscience? In fact, the gospel exhorts us to outdo one another in acts of kindness and love. So why not celebrate those who value and protect the vulnerable and the poor? Isn’t that the very best of reasons to feather your cap? When young Fr. Michael McGivney gathered together men from his parish to create a pool of resources so they could support families in crisis (widows and orphans) I’m sure those who received the Knights' assistance saw them as their 'Knights in shining armour'. I wonder if those humble men as they gathered together for the first time, ever imagined a century later they’d be the founders of an organization that boasts 1.8 million members and over 14 000 councils worldwide? Amazing, really. How could they have possibly foreseen what God had in store for them. Who would have thought these humble men would be the ones to help with restoration projects at the Vatican, or help rebuild parts of Rome devastated by the Second World War, or that one of their members would become the first Catholic President of the United States? An impressive legacy full of real-life heroes. Today, the Knights of Columbus are recognized as one of the World’s Most Ethical Companies. In a climate where corporate greed seems to be limitless, it is reassuring (and should make us all very proud) that there is a Catholic insurance company which says yes, there is a way to do business without losing your financial integrity or reducing everything to the bottom line. And all that is worth celebrating! So join us for the Knight’s Supreme Convention this year from August 5-7, 2014 as we applaud the Knights good works and God’s transformative grace in their lives. During our live coverage of the Supreme Convention, Sebastian Gomes and I will be joined by David Naglieri, Producer and Media Manager for the Knights of Columbus Supreme Council (and former Salt + Light producer) to bring you the highlights. We'll also feature one of their latest documentaries Francis: The Pope From the New World honouring our newly minted, all-star Pontiff. There will be a lot of good news to share: from disaster relief in the Philippines, work with Special Olympians, Coats for Kids, to their involvement in the recent canonizations of Saints John XXIII and John Paul II. In the meantime, over the next few days you can look forward to some behind the scenes images of Knights’ latest productions John Paul II in America: Uniting a Continent - which will have nationwide PBS syndication - as well as Francis: The Pope from the New World. Hopefully, by the end of it you’ll agree with me. All those good works are definitely worth at least a couple of feathers in their cap. 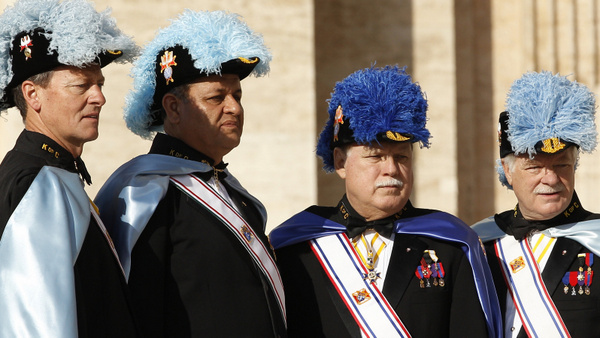