Nothing More Beautiful: Jesus Christ: The Way, Truth, and Life

It’s the second season of Nothing More Beautiful, and through catechesis and witness talks this initiative of the Archdiocese of Edmonton is inviting viewers to encounter anew the beauty of Christ! 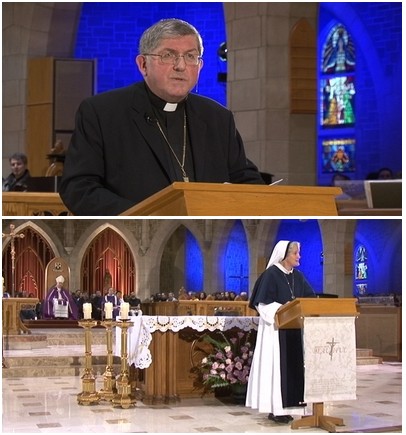 The latest encounter of this season focuses on the theme of Jesus Christ: The Way, Truth, and Life.

The basic thing about being a Christian, is that a person has encountered Jesus Christ, and that it shows.

That's how Toronto's chief shepherd Archbishop Thomas Collins' began his catechesis for the evening. Throughout the remainder of his talk, Archbishop Collins expands on the different ways we encounter Jesus, while incorporating what it means to say that Jesus is the Way, the Truth, and the Life:

We need to know truly the one we love, and his teachings. A mere emotional Christianity, devoid of doctrine, and caught up in moral relativism, is a fraud. Our mission has always been what used to be the first answer in the old catechism. Why did God make you? God made me to know, to love, and to serve him. That is it: we need first to know, so that we can love through authentic service.

It was a bit of a homecoming for Archbishop Collins. Many viewers are familiar with Archbishop Collins from his Lectio Divina series on Salt + Light Television, but what some may not realize is that before coming to Toronto, he was the Archbishop of Edmonton for seven and a half years. The witness talk is given by the Superior General of the Sisters of Life, Mother Agnes Mary Donovan. This New York-based religious community of consecrated women are dedicated to the protection of the sacredness of human life. Mother Agnes Mary discusses the foundation of the Sisters of Life and the graces that they have received in their work -- including, appropriately for Advent, a touching story of how the Visitation between Mary and Elizabeth changed the mind of a distressed pregnant woman. Join us on Saturday, December 19th at 9:00 pm ET, or Tuesday, December 22nd at 8:00 pm ET for Nothing More Beautiful: Jesus Christ: The Way, Truth, and Life, only on Salt + Light Television!