The Priests' Noël shares the true meaning of Christmas, and offers listeners a surprise guest on a Christmas classic

I remember as a kid watching Christmas music videos on December 25th.  Among those videos was one tune that I couldn't believe was considered a Christmas song.  To me the singing was bizarre: a kind of slurred, harsh barking; contrasted by a more melodious female voice.  The content of the song, hardly struck me as very Christmas-y either.  The lyrics included: "It was Christmas Eve, babe / In the drunk tank," as well as "I could have been someone / Well so could anyone / You took my dreams from me," and a selection of many other... shall I say... colourful phrases.  It was a dysfunctional Christmas tale, told through a couple who were angry, but in their dependency needed each other to survive.  I suppose everyone has a different experience of Christmas, and for me as a kid, that certainly wasn't what I was thinking of Christmas day!  Anyway, that song was the wildly successful Fairytale of New York, by the Irish folk punk band The Pogues, and featuring Kirsty MacColl.
Fast forward twenty or so years. 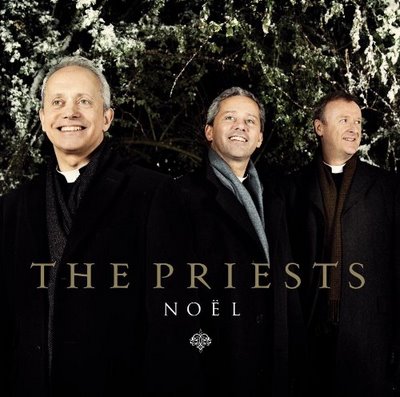 I had downloaded The Priest's Christmas album, Noël, and was listening to it on my commute to work.  The familiar tune of Little Drummer Boy/Peace on Earth began to play.  I love the original Bing Crosby /David Bowie version of this song -- and much like the experience I described above, I would inevitably see the music video Christmas day.  The collaboration between the two was recorded September 11th 1977 for Crosby's Christmas special that year.  That was just over a month before Bing Crosby died.  The Christmas special still aired, and the song has become a popular tune this time of year.  For us now, the duet between Crosby and Bowie may not seem so strange, but at the time it was an odd collaboration.  Bowie was certainly much more outlandish back then, and Bing embodied the classic crooner, a master of traditional Christmas music! Perhaps, based on the curious birth of the song, I shouldn't have been so surprised when I began to hear a cigarette and alcohol worn Irish voice sing "Come they told me, pa rum pa pum pum." Not having looked at the track listing, I thought to myself "Wait a second, is that the guy from the Pogues?" Sure enough, The Priests had recorded a version of Little Drummer Boy/Peace on Earth with The Pogues' former lead singer Shane MacGowan.  The arrangement is slightly different from the Crosby/Bowie version, but the magic is still there.  Some fans call it an odd collaboration, but if you read the liner notes to the song, you will notice that the Priests point to the Crosby/Bowie version being shocking at first, but soon becoming a classic. I don't know if this track will become a classic, time will determine that.  But I do think it's very good.  The polished Priests with the rougher, weathered voice of MacGowan is a refreshing sound in amongst many other versions that feel like boring going-through-the-motions takes on the Crosby/Bowie classic.  It's a unique collaboration, and even a bold move when you consider each musician's audience.  Some fans have been taken aback by a collaboration with a singer who's wild alcohol and drug filled history has been deemed "scandalous," but The Priests are not condoning his behaviour.  They're singing with him, and good for them to take the risk.  (in an interview Fr. David noted MacGowan "came across as a deeper, richer and more complex person than he’s often portrayed.") And just as it is a unique collaboration, the track is unique to the album as a whole.  The 15 track listing include beautiful Christmas classics like The First Nowell, O Come All Ye Faithful, Hark the Herald Angels Sing, and Joy to the World.  Two songs that I found particularly compelling were God Rest Ye Merry Gentlemen and In the Bleak Midwinter. The former I was always indifferent to as a Christmas carol, but the voices of the Priests, combined with the musical and choral arrangement make a splendid version.  I feel as if I am sitting with Frs. Eugene, Martin and David, and they are telling me the Nativity story for the first time! The latter is by far my favourite track.  It is such a beautiful and haunting carol, but there is a subdued joy and awe.  The Priests capture it perfectly.  It really is exquisite.  And as we prepare in this time of Advent for Christmas, who is not moved by the closing verse: "What can I give Him, poor as I am? / If I were a shepherd, I would bring a lamb / If I were a Wise Man, I would do my part / Yet what I can I give Him: give my heart."  Before hearing this version, I had always skipped over this song on other Christmas albums, but on Noël, In the Bleak Midwinter is the most played track. My only complaint, and this is the greedy side of me, is that I would have liked to have heard more.  Their version of Silent Night captures the peace of the song and is certainly a must for any Christmas album, but it appeared on 2009's Harmony.  There's also a second, Priests' only, version of Little Drummer Boy/Peace on Earth.  Fr. David estimated in an interview they had recorded some 22 carols.  Perhaps we could have had a couple of extra holiday treats?  (I know that one online service was offering Coventry Carol as a bonus track for pre-orders; iTunes was offering O Holy Night, which was also on their debut album.) I highly recommend Noël. The album as a whole is excellent.  It strikes a good balance of celebratory carols with thoughtful and reflective hymns.  The Priests' sound fantastic on it, as do the arrangements.  The liner notes also offer a nice glimpse into why they chose the carols they chose.  Perhaps best of all, the album offers a respite from the world of wrapping paper, shopping malls, hustle and bustle, and red suits that seems so front and center this time of year.  Instead, you are led to consider the true meaning of the season: that marvelous event two thousand years ago when out of love for his creation, God came to us as a tiny child.     That is why this album will become a classic in my household, and perhaps in yours. Noël has been in wide release since December 6th.