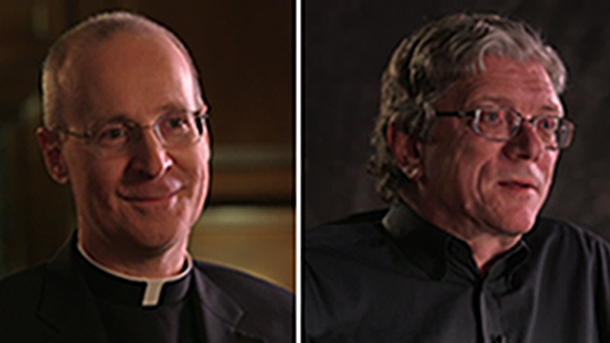 Point of View: Interpreting the Francis Effect is a S+L series that goes deeper into the important questions surrounding the person and pontificate of Pope Francis. The series consists of a selection of the full interviews from S+L’s original documentary The Francis Effect.
Tonight: Fr. James Martin SJ and Dr. Philip Berger
In this episode of Point of View, we hear from two men who share their unique thoughts on Pope Francis and how he’s reaching out and affecting so many different people.
Everyone remembers the famous “Jesuit interview” with Pope Francis that was published in September of 2013. Fr. James Martin, SJ, Editor-at-Large for America Magazine in New York City is the man who first proposed the idea to his colleagues, and then collaborated with the Jesuit journal in Rome to get it done.
For Fr. Martin, the interview was a glimpse into the real Francis, his personality, faith and perspective on the Church. This kind of openness and accessibility is authentically Francis, according to Fr. Martin, who received a personal thank-you letter from the Pope after sending him his latest books published in Spanish. “He started the letter by saying “Dear brother”, and I thought that was beautiful because we’re brother Jesuits, and I think most bishops or cardinals would write, “Dear father”, but he writes, “Dear brother, thank you for sending me these books.” Fr. Martin tells the whole story and comments further on the "Jesuit-ness" of Francis in this interview.
Part two of this episode is my interview with Dr. Philip Berger, Medical Director with the Inner City Health Program at St. Michael’s Hospital in Toronto, and the Co-founder of Canadian Doctors for Refugee Care. Dr. Berger’s professional life has been dedicated to the ongoing fight for proper health care for refugees in Canada, an uphill battle, he says, because of recent policy changes under the current federal government.
“I’m sure that Pope Francis’ statements on refugees are helping all the refugee advocates in Canada who are attempting to make Canada a safe place for refugees, as it has been in the past,” he says.
Dr. Berger, who is Jewish, sees in Pope Francis a much needed global moral voice for the poor and marginalized. He is so impressed with the current leader of the Catholic Church for “his refusal to make severe judgments on people, even people whose activities may be anathema to the Catholic Church.” This approach, he says, “humanizes the Pope and brings his teachings down to the street level, which is really where they should penetrate.”
Dr. Berger’s testimony as a medical doctor and concerned citizen sheds light on the immense value of the Catholic Church’s moral voice in this day and age, particularly with Pope Francis, who is undoubtedly a Pope for the entire human family.
Watch Point of View: Interpreting the Francis Effect Airs Wednesday, June 17, 2015 9:00 pm ET / 6:00 pm PT Only on Salt and Light Television (check schedule for repeats)