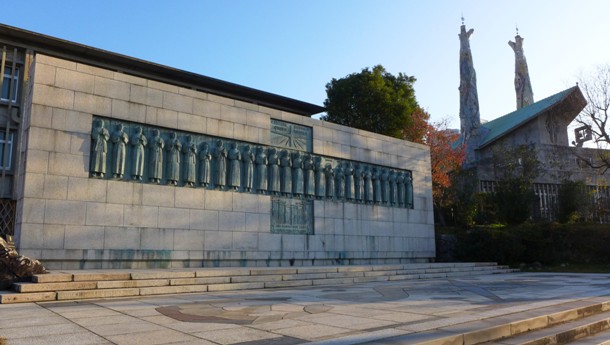 National Shrine of the Twenty-Six Martyrs of Japan, Nagasaki
Three days after the demise of Hiroshima, on 9 August 1947, a second atomic bomb devastated the port city of Nagasaki. The “Fat Man” bomb, with 6.4 kg of plutonium and supposedly 30% more destructive power than the Hiroshima counterpart, missed the original city centre target by 3 km and hit the Urakami valley area at 11:02 in the morning. Despite the shielding by the hills of the city from much of the bomb's power, 39% of the buildings in the city collapsed in the fire storm of wind of 1,005 km/h and 3,900°C. As many as 80,000 people perished over time due to the bomb, with many more severely injured with burns and radiation. 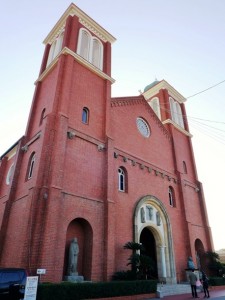 Urakami Cathedral, Nagasaki
500 metres northeast from the atomic bomb hypocentre was the majestic Church of the Immaculate Conception of Mary, commonly known as the Urakami Church. Situated on the top of the Urakami hill, the church aided the B-29 bomber to identify Nagasaki and hasten its demise. The church took 50 years to build (1875-1925) but only an instant to be destroyed. It was the largest church in East Asia at the time of completion, but it also suffered the most horrific destruction. Two priests who were hearing confession and 20 penitents died under the rubble on that Thursday morning; outside the church, 8,500 out of Urakami's 12,000 parishioners met the same fate. Most Catholics in Nagasaki inhabited in this region. Nagasaki is the birthplace and capital of Catholicism in Japan. St. Francis Xavier became the first missionary to set foot in the country in 1549. Missionary activities flourished in subsequent decades; the number of converts surpassed 300,000. Most of Nagasaki's inhabitants became Catholic. Toyotomi Hideyoshi, the ruler of Japan, became suspicious of European activities in the country, and issued a ban on Catholicism in 1587, a precursor to decades of persecutions of the Church and a stream of martyrdom. 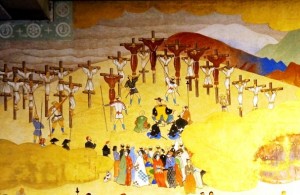 Following a month-long parade from Kyoto with their faces mutilated, 26 priests and laypeople were crucified in Nagasaki and pierced with spears on 5 February 1597. When the news reached Rome, Pope Clement VIII was in shock over the manner of their martyrdom. This group of martyrs, St. Paul Miki and companions, was promptly beatified in 1627 and canonized in 1862, is celebrated as a memorial in the General Roman Calendar on 6 February every year. Persecutions intensified in the 17th century, especially during the Great Martyrdom of Nagasaki in 1622. 205 martyrs of Japan were beatified in 1867. Lawrence Ruiz and 15 companions were beatified in 1981 and canonized in 1987. Petrus Kibe Kasui and 187 companions were beatified in 2008. 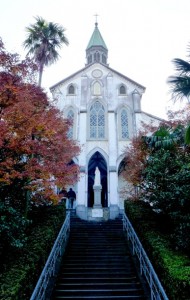 Oura Church, Nagasaki
As missionaries were driven out and churches were torn down, the Catholic Church was thought to have totally disappeared in Japan. In fact, the Catholics went underground, with a majority in the Nagasaki region. After 200 years, when Japan reopened its doors to missionaries, the Paris Foreign Missions Society sent Fr. Bernard Petitjean for missionary work in Japan. He built a church (locally known as the Oura Church) in the French region of Nagasaki in honour of the 26 martyrs and blessed it on 19 February 1865. On March 17, a group of local people requested to pray inside the church and asked him where the statue of the Virgin Mary was. The priest then came to the realization that these Kakure Kirishitans (hidden Christians) were descendants of the underground Catholics from 200 years ago, who passed the faith from one generation to the next. For this significant event, called the Shinto Hakken (discovery of followers), Pope Pius IX appointed Fr. Petitjean as the first Vicar Apostolic of Japan in the next year, and the Oura Church became the cathedral. 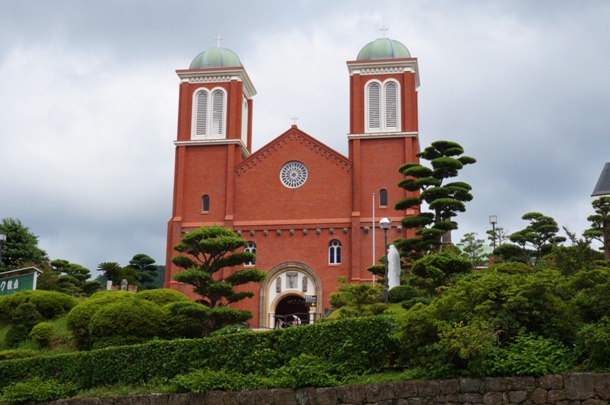 Urakami Cathedral of the Immaculate Conception, Nagasaki
As history unfolded, Bishop Petitjean too suffered persecution from the government. However, no one would have imagined that this non-stop persecution of Nagasaki would even be topped by its annihilation by a nuclear weapon. To our consolation, Christ always wins. The Urakami Church was eventually rebuilt in 1959 and received the honour of cathedral from the Oura Church in 1962. In a country where Catholics are only 0.43% of the population, the Nagasaki archdiocese unexpectedly boasts a 4.3% Catholic population. The Church truly grows from the blood of martyrs. During this year we are not only somberly marking the 70th anniversary of the atomic bombing, but also joyously celebrating the 150th anniversary of the discovery of followers in Japan. In the face of escalation of tensions between nations, rise of terror groups and incessant nuclear arms race, we must work for peace in the world. God never fails to surprise us. 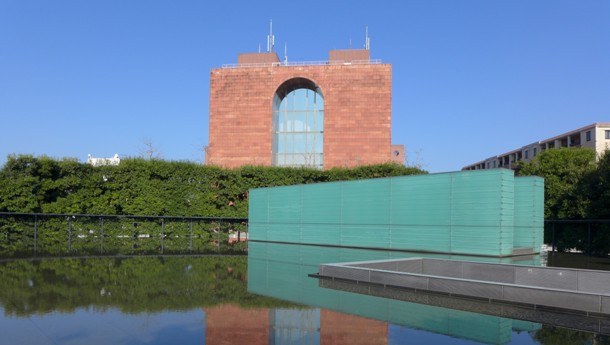