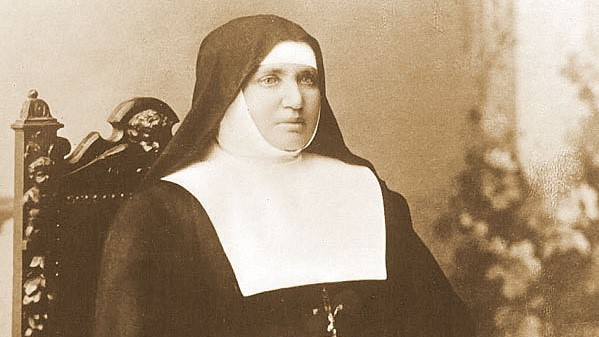 Blessed Maria Francesca Rubatto will be canonized on May 15, 2022. (Source: Iglesia Católica de Montevideo)
A hidden life Anna Maria Rubatto – “Marietta” to her family – was born in 1844 to a working-class family in Carmagnola, a northern Italian town situated 18 miles south of Turin. For the first four decades, her life was fairly unremarkable. Although she received at least one offer of marriage, she remained true all her life to a personal vow of virginity made as a child. When her mother died in 1863, the newly orphaned Anna Maria moved to Turin to stay with an older sister. There she entered the service of a local noblewoman, Marianna Scoffone, as a lady-in-waiting. The older woman took a great liking to Anna Maria, treating her like a daughter and enabling her to spend her days in charitable works: conducting catechism classes for the local children and visiting the sick and the poor. Later, she also assisted her patroness with the management of her substantial assets. When Marianna Scoffone died in 1882, Anna Maria returned to her sister. But then, the following year, an event took place which changed the trajectory of her life.   A new mission Anna Maria had gone on vacation to the seaside town of Loano, where she spent some time every day praying in the Capuchin church. One day, on leaving the church, as she was passing by the construction site for a new convent, a stone fell, hitting one of the workmen on the head. Anna Maria, with her years of experience, tended to the man’s wound and gave him some money – two days’ pay – so he could take time to recover. Her act of charity did not go unnoticed. It so happened that the women who were to occupy the convent were looking for a spiritual leader, and now they felt that God had given them a sign. After a period of discernment with her spiritual director and also with St. John Bosco – whom she had come to know through her catechetical work in Turin – she decided to accept the new role leading a community dedicated to the care of the sick and the education of children. And so in 1885, she took the name Maria Francesca di Gesù and became the superior of the newly formed Institute of Capuchin Sisters of Loano (which changed its name in 1973 to the Capuchin Sisters of Mother Rubatto). Although she had been chosen initially for her show of spirituality in action, no doubt her experience of managing Marianna Scoffone’s estate over several years had given her the administrative capabilities and financial know-how so vital to the successful running of a religious community.   To the ends of the earth Soon the community expanded beyond the bounds of Loano to other parts of northern Italy. Then in 1892, Mother Rubatto sailed for Montevideo in Uruguay – the first of four such trips she would make in her zealous support for her sisters on two sides of the Atlantic. In her nearly 20 years as superior, she established 18 houses in Italy, Uruguay, Argentina, and Brazil. In addition, the Capuchin Sisters of Mother Rubatto now also serve in Peru, Cameroon, Kenya, Malawi, Ethiopia, and Eritrea. In 1904, during one of her visits to Uruguay, Mother Rubatto fell ill. She died of cancer on August 6 and was buried among the poor, as she had requested. She was beatified by Pope John Paul II in 1993.   A Uruguayan miracle In 2000, a young man in Montevideo suffered severe head trauma from a car accident and was in the hospital with a coma. When his family sought the intercession of Mother Rubatto, he made an unexpected and inexplicable recovery. This miracle was approved by Pope Francis in February 2020, and so on May 15, 2022, Mother Rubatto will join nine other blesseds in becoming a canonized saint.   Possible patronage Although Mother Rubatto did not spend much of her life in Uruguay, she was an influential person in that region and was considered their first blessed when she was beatified in 1993. The government of Uruguay even commissioned a stamp for the occasion and another in 2017 for the 125th anniversary of her arrival on their shores. Uruguay is, of course, also the site of Mother Rubatto’s tomb. So it would only be natural for her to watch over the citizens of Uruguay as their patron alongside the Blessed Mother, Saint James the Less, and Saint Philip. Mother Rubatto would also be an appropriate patron for those whose vocation to religious life manifests itself relatively late in life, as is so often the case in our modern age.

“Do everything for the love of God and you will see that you do not feel the weight of anything. If we all begin by taking up our own cross willingly, we will find ourselves at the summit of the holy mountain without having felt its weight and without having put it off onto others.” – Letter from Blessed Maria Francesca di Gesù to her sisters