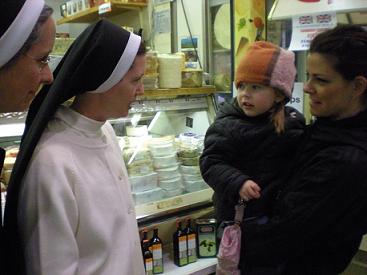 One Saturday morning, Sr. Catherine Marie and Sr. Mary Emily were strolling through Toronto's St. Lawrence Market. They were new to the city and this market was a sight to see -- parents with their children buying fresh bread, elderly people sitting and talking and vendors promoting their wares. And there was also so much to taste -- 20 different kinds of mustard, tortellini in tomato sauce, hot and spicy nuts...
They were oblivious to the growing interest of a three-year-old girl in the arms of her mother. This little brunette kept pointing to Sr. Mary Emily and asking her mom to go closer to her. When her mom finally reached Sr. Mary Emily, she pointed a finger at her head, asking her mom, “What’s that?” Sr. Mary Emily turned around smiling, and said, “It’s a veil.” The amused mother quietly told Sr. Mary Emily, “She thinks you’re from Madeline -- Miss Clavel!” (Miss Clavel is a fictional nun in the famous children’s book series "Madeline" by Ludwig Bemelman, first published in 1939.) 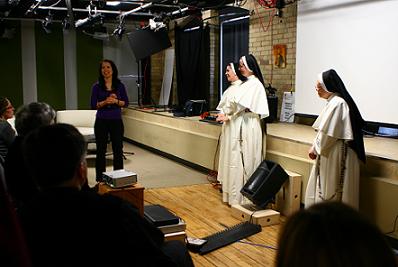 Yes, from April 3rd to 5th, three Dominican Sisters of St. Cecilia from Nashville, Tennessee wowed Torontonians with their full black and white habits and became our very own Miss Clavel's: Sr. Marie Vianney, 57 years in community, Sr. Catherine Marie, a member of the General Council, and Sr. Mary Emily, Vocations Director. They came at the invitation of Fr. Thomas Rosica, C.S.B., CEO of Salt + Light Television, who wanted to introduce them to the Toronto's Catholic community and Archbishop Thomas Collins. At 84, Sr. Marie Vianney is bright-eyed and interested in everyone and everything. She was eager to explore the Toronto she knew many years ago, so Richard Valenti (editor at Salt + Light Television) and I took her and the other two sisters out for an extensive weekend-long tour in between their main activities. 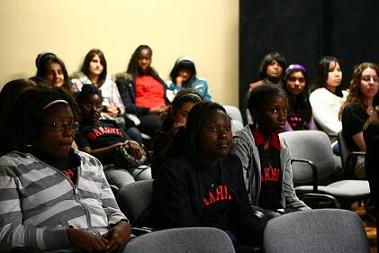 One of the sisters' featured appearances was the screening of the Salt + Light film Beloved: The Dominican Sisters of St. Cecilia. Among the 40 guests arriving at the S+L studio for the event were students from St. Josephine Bakhita Catholic Elementary School in Brampton, Ontario. During a Q&A afterwads, the students asked questions like, “Do you paint your nails and wear jeans?” and “Do you always wear the same habit?” Other questions included, “How do you know someone has a Dominican vocation?” Afterwards, some of the young women circled their of chairs around Sr. Marie Vianney, who told them stories about her life and vocation. (A student from St. Josephine Bakhita School will soon write a blog post about her encounter.) Another weekend highlight was the Palm Sunday procession from St. Paul’s Basilica to St. Michael’s Cathedral. (Richard Valenti will later share what he experienced on the walk.) Sr. Marie Vianney braved the trek, reasoning, “If I don’t do this procession, I know I’ll regret it for the rest of my life!” Following Mass, the Dominican Sisters and Salt + Light staff shared a late dinner with Fr. Rosica and the Archbishop at nearby Fran’s Restaurant. Demonstrating the constitution and energy of a 20-year-old, Sr. Marie Vianney ordered steak and potatoes. 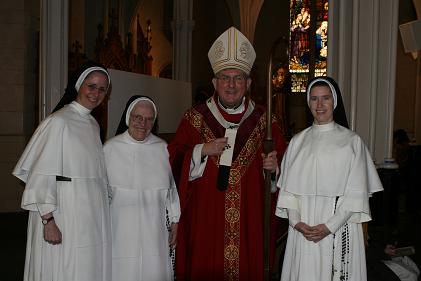 My final highlight to share was on Sunday morning. Sr. Marie Vianney asked us if we could take her to St. Cecilia’s church in Toronto, since the church's namesake saint is the patroness of their order. We thought we lost Sr. Marie Vianney when she went downstairs and didn’t resurface for 15 minutes! We found a group of excitable children gathered around her. From there, we took the Dominican sisters to the University of Toronto Newman Centre for a quick visit and rushed off to the noon Mass at St. Michael’s Cathedral, where the Archbishop introduced them to the congregation. I hope that Sr. Marie Vianney will be able to share her thoughts about the weekend in an upcoming Salt + Light blog. You'll also see her soon on an upcoming episode of Witness with Fr. Thomas Rosica. It was indeed a wonderful and busy weekend for both the Salt + Light team, the Dominican Sisters of St. Cecilia, and the Torontonians who were taken aback by these powerful witnesses to divine love.