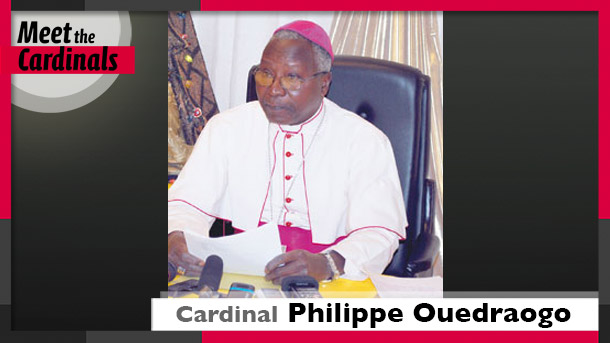 By Jonathan Luxmoore Catholic News Service
OUAGADOUGOU, Burkina Faso (CNS) -- When Archbishop Philippe Ouedraogo of Ouagadougou was told he had been named a cardinal Jan. 12, he thought it was someone playing a joke.
The telephone call from Rome was in Italian, a language the prelate hardly understood, and he had not been notified of the pope's decision in advance.
"I asked the caller what the pope wanted from the little bishop of the savannah," Cardinal-designate Ouedraogo told Burkina Faso's Aouaga.com news agency Jan. 13.
"I myself am just a little pastor from the Burkina savannah who tries to get the job done and do what I can. As St. Augustine said, this is a service of love, and I try my best to do it without ambition or pretension," he said.
The archbishop from the landlocked African nation will be among 19 men, including one other African, elevated in a consistory at the Vatican Feb. 22.
The United Nations ranks Burkina Faso as the world's third-poorest nation. It has a literacy rate of 21 percent and life expectancy of 55 years.
In July, the bishops said a "dangerous mixture" of growing literacy, access to information and desire for riches was widening the social gap and fuelling hopelessness and violence.
Cardinal-designate Ouedraogo has been critical of the government.
In his Christmas homily, he deplored Burkina Faso's domination by "a handful of citizens who hold the great part of its wealth" in a society "characterized by disparities, inequality, injustice, poverty and misery."
He added that Africa risked "falling prey to fratricidal conflicts and wars" that would decimate populations and destroy natural wealth through "tribalism, regionalism, ethnicism, religious intolerance and thirst for power and money."
"This oppressed and deprived world includes an immense throng of poor, incapable of feeding and looking after themselves," said the archbishop, whose homily was published on his church's website.
"How numerous are the unemployed, the jobless dropouts, the prisoners languishing without sentences, the victims of injustice, violent crimes and economic crimes," he said.
Cardinal-designate Ouedraogo, who turns 69 Jan. 25, was ordained in July 1973 in Kaya, his home diocese. He spent five years as vicar of its cathedral parish.
In 1978, he was sent to Rome to study canon law. He obtained a doctorate in the field from the Pontifical Urbanian University in 1983.
For 16 years, he ministered in parish work in his homeland while also serving as vicar general of the Kaya Diocese and director of the diocesan seminary. In July 1996, he was named bishop of Ouahigouya. Cardinal-designate Ouedraogo also was president of the bishops' conference of Burkina Faso and Niger from 2001 to 2007.
In May 2009, the cardinal-designate was appointed archbishop of Ouagadougou.
In his Aouaga.com interview, Archbishop Ouedraogo said, "None of Africa's sees traditionally carry a cardinal's title, so the pope wasn't obliged to appoint me."
"I think God's people in Burkina should see this as an act of grace, that the Lord has cast a favorable eye on our family church in choosing one of its sons as the pope's immediate collaborator," he said.