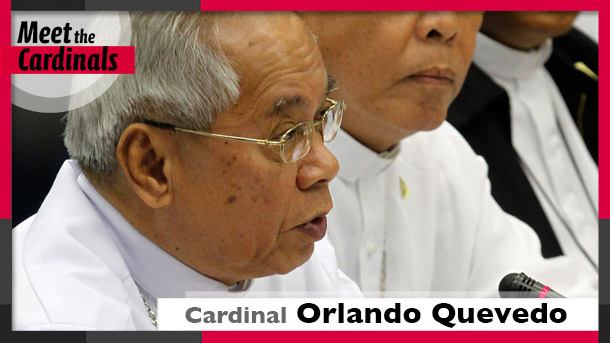 By Simone Orendain Catholic News Service
MANILA, Philippines (CNS) -- The Philippines' newly named cardinal works in the heart of the country's Muslim region, and Muslims as well as Catholics praised him and his work.
The chief peace negotiator of the largest Muslim rebel group, the Moro Islamic Liberation Front, whose administrative camp is on the outskirts of Cotabato, said the city's archbishop, Cardinal-designate Orlando Quevedo, "has been very supportive of the peace process."
"Even during the dark days of martial law (in the 1970s), he was really for the protection of human rights here, especially for the Moro people who have been persecuted," said chief negotiator Mohager Iqbal.
"Moro" was the word the Spanish colonizers used to describe Muslims in the southern Philippines.
Cardinal-designate Quevedo, 74, will be among 19 men elevated to the College of Cardinals in a consistory at the Vatican Feb. 22.
Iqbal told Catholic News Service in a phone interview that Archbishop Quevedo has been "very fair" and even-handed about understanding the plight of the Muslims as they fought for the right to self-determination. Iqbal has followed the archbishop's writings on the subject and even quoted him in a book.
Now, after nearly 40 years of conflict that left more than 150,000 dead and many attempts at negotiating peace, the Moro Islamic Liberation Front is in the very last stages of forging a permanent pact with the government. Iqbal said with the new designation, he thinks Cardinal-designate Quevedo will have a wider reach to the population and can help shape public opinion about the new peace deal.
Father Louis Lougen, superior general of the Oblates of Mary Immaculate, the religious order to which Cardinal-designate Quevedo belongs, said that by naming the Cotabato archbishop a cardinal, "Pope Francis is giving a signal to all of us: It is the recognition of a very committed missionary, a priest and bishop who leads by serving others, whose main concern is the Gospel and the poor and who has worked tirelessly to promote friendship between Christians and Muslims, to support their struggle to live together in respect and peace."
The Oblate superior also said he hoped the naming of a new cardinal from a region that has suffered from 40 years of sporadic conflicts would "bring attention to the importance of dialogue, respect, peace-building and may reinforce the commitment of all of us to this process."
Born March 11, 1939, in a northern province but raised in the Muslim region in the South, Cardinal-designate Quevedo served in and around Cotabato for the majority of his career.
After studying at Notre Dame high school in Koronadal and at the minor seminary in Quezon City, he entered the Oblates and professed his first vows in Mission, Texas, in 1957. Returning to the Philippines, he earned his teaching degree from the Pontifical University of Santo Tomas in Manila. He returned to the United States to study theology at Oblate College in Washington, where he was ordained to the priesthood in 1964.
In his early years, he was the dean of student affairs at Notre Dame University in Cotabato, where seminarians sought him out for advice, said Cotabato Auxiliary Bishop Jose Bagaforo.
"He was very, very close to the students," Bishop Bagaforo told CNS. "He was very approachable ... and at that time he was already a very simple priest and accommodating to many of (us)."
The cardinal-designate became president of the university. Throughout all those years, Bishop Bagaforo said he was a "good basketball player, even if he was small" in stature.
"Whenever there were opportunities, he would play," the bishop said. "When he was a young bishop he would play basketball ... when there were tournaments between priests, seminarians and laypeople, he would be there."
Bishop Bagaforo said the Cotabato Archdiocese is elated and honored to have a cardinal. He said he was "very, very, very much surprised" that a cardinal would come from their region, because the designation has traditionally been conferred in the capital, Manila, or Cebu, in the central Philippines, where Catholicism first took root.
"I think it is not because of Cotabato why Archbishop Quevedo was selected to become a cardinal. I think it is because of him, himself, the person of Archbishop Quevedo," Bishop Bagaforo said:
He described the cardinal-designate as "very passionate" about his work in promoting basic ecclesial communities, a movement that takes the church to the grass-roots level. Bishop Bagaforo called it a "very effective strategy" in evangelization.
Cardinal-designate Quevedo served as president of the Catholic Bishops' Conference of the Philippines, 1999-2003, and served as general secretary of the Federation of Asian Bishops' Conferences, 2005-2011.
In a statement, Archbishop Socrates Villegas of Lingayen-Dagupan, president of the Philippine bishops' conference, praised Pope Francis' decision to make his confrere a cardinal, saying he was known in the conference for his "mental clarity and intellectual brilliance."
Manila Cardinal Luis Tagle offered prayers for the cardinal-designate and said in a statement, "I am extremely happy to have him as a confrere in the College of Cardinals, where our collaboration and friendship nurtured these past 30 years will continue on another level."
The cardinal-designate was named bishop of Kidapawan in 1980 and archbishop of Nueva Segovia in 1986. Blessed John Paul II named him archbishop of Cotabato in 1998.
---
(CBCPNews Photo)