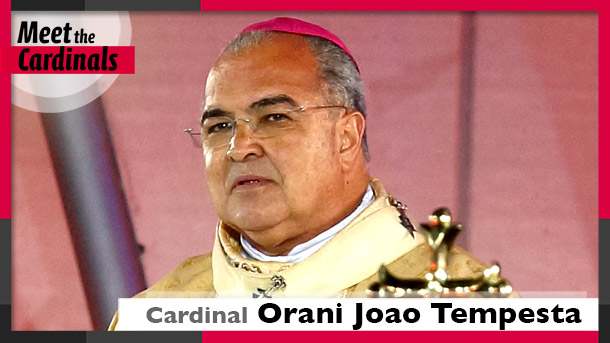 By Lise Alves Catholic News Service
SAO PAULO (CNS) -- Cardinal-designate Orani Tempesta of Rio de Janeiro said he was surprised that Pope Francis named him a cardinal, but friends and thousands of Brazilian Catholics saw it coming.
At the end of World Youth Day in July in Rio de Janeiro, several Brazilian newspapers and TV stations covering the event reported that Pope Francis, in thanking the Rio archbishop for his role in holding the event, had referred to him as cardinal.
"I think he was the only one who didn't hear the Holy Father say cardinal," chuckled Msgr. Sergio Costa Couto of the Church Our Lady of Glory on the Knoll in Rio de Janeiro.
Msgr. Couto said the news that Cardinal-designate Tempesta will be elevated into the College of Cardinals Feb. 22 in Rome has caused a great deal of joy among the religious and people in Rio.
"He makes friends very easily, and he maintains friendships for a long time," said Msgr. Couto, who has been friends with the cardinal-designate since the 1980s.
With a friendship that goes back to 1974, when they met at St. Bernard Monastery in Sao Jose do Rio Pardo, Cistercian Abbot Paulo Celso Demartini said the nomination was a tribute to a man who has lived his life humbly to serve.
"He is a humble, simple man, faithful to the doctrine," Abbot Demartini said of his friend. "He always has a kind word for us, visits us when he can and telephones us often to ask how we are."
Orani Tempesta was born June 23, 1950 in Sao Jose do Rio Pardo. He entered the Cistercian order in 1969 and was ordained a priest Dec. 4, 1974.
After rising to the post of abbot at the Cistercian Monastery of St. Bernard in 1996, he was named bishop of Sao Jose do Rio Preto in 1997. In 2004 he became archbishop of Belem, the most important archdiocese in Brazil's Amazon region.
In 2009, when he was transferred to Rio de Janeiro, he told Catholics in Belem, "I am leaving for Rio, but I take with me Belem, Para state, the warmth of this state and the friendliness of its people."
Cardinal-designate Tempesta arrived in Rio de Janeiro with instructions to bring back the flock, many of whom had strayed toward evangelical congregations. He is often seen visiting poor communities in Rio and going up the hillsides to slums to visit his flock, even when several priests from the archdiocese have been threatened by drug lords.
Msgr. Couto said he believes his friend is unlikely to change his routine after formally becoming a cardinal. He said one of the cardinal-designate's most striking characteristics is his drive to continue on, even after most of the other priests are already exhausted.
In 2011, after mudslides in a mountainous region of Rio de Janeiro state left more than 850 dead and thousands homeless, "he and I left at 2 a.m. from Rio to drive up to celebrate Mass. The road was almost unpassable at certain points," Msgr. Couto recalled.
"We arrived early in the morning; he celebrated Mass and then went back down the mountains and onto Sao Paulo because a friend had passed away. He seems never to tire out."
Abbot Demartini agreed with Msgr. Couto.
"I remember some of the letters he would write to me while I was studying at St. Benedict's in Rio and he was still at the monastery. He would finish his letters close to 2 a.m. and would have to rise again at 4:30. He always had a word of encouragement, always worried about how we were doing," said the abbot.
"Three words to describe him ... father, brother, friend," said Abbot Demartini.
---
(CNS Photo/Paul Haring)