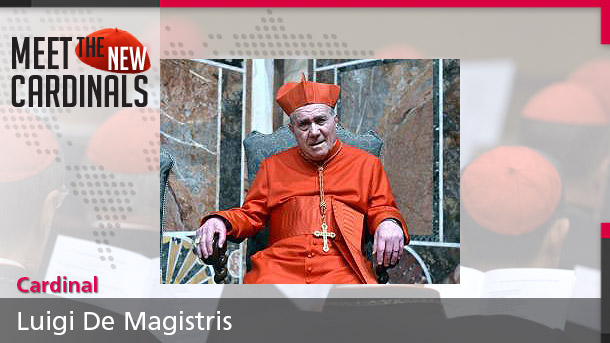 by Cindy Wooden Catholic News Service
VATICAN CITY (CNS) -- The day Pope Francis announced he would be making Italian Archbishop Luigi De Magistris a cardinal, the archbishop was doing what he usually did in retirement on Sundays: He was administering the sacrament of confession in the cathedral of Cagliari, his hometown.
The cardinal-designate, who will celebrate his 89th birthday nine days after receiving his red hat Feb. 14, spent almost a quarter-century at the Apostolic Penitentiary, the Vatican tribunal dealing with matters of conscience. The office also coordinates the work of the priests serving as confessors in St. Peter's Basilica and the major basilicas of Rome and an annual course for priests and seminarians on administering the sacrament of penance.
In preparation for the Jubilee Year 2000, then-Msgr. De Magistris put out a general call for more priests to staff the confessionals of the Rome basilicas.
"The more there are, the better," he said. "We will have to pray to the Lord to send many, many good priests" to administer the sacrament.
Pope Francis announced Jan. 4 the names of the 20 churchmen he had chosen to induct into the College of Cardinals. Archbishop De Magistris and four others are over the age of 80, so they will be ineligible to participate in a conclave to elect a new pope, but they are invited to take part in the meetings and discussions of the college, which advises the pope.
Born in Cagliari Feb. 23, 1926, he studied for the priesthood in Rome, earning degrees in philosophy and theology from the Pontifical Lateran University, and was ordained in 1952. After six years of pastoral ministry in the Archdiocese of Cagliari, he was called back to the university, this time to serve as its secretary.
After a year, he was transferred to what is now known as the Congregation for the Doctrine of the Faith, where he served under Cardinal Alfredo Ottaviani during the Second Vatican Council. In 1969, he moved to the Vatican Secretariat of State where he worked for 10 years. Pope John Paul II named him regent of the Apostolic Penitentiary in 1979 and named him a bishop in 1996.
Solid rumors that he was about to be named a cardinal began in 2001 when Pope John Paul named him head of the Apostolic Penitentiary, a position church rules reserve to a cardinal. But he was still an archbishop in 2003 when he retired at the age of 77.
He has served as a consultant to the congregations for Divine Worship and the Sacraments, for Saints' Causes, the Evangelization of Peoples and Clergy, as well as for the Pontifical Commission "Ecclesia Dei," which Pope John Paul established to assist Catholics attached to the pre-Vatican II liturgy.