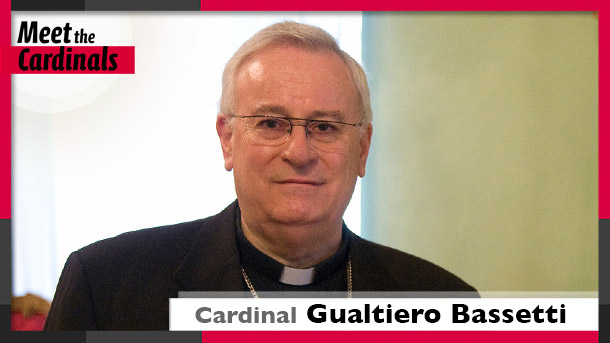 By Cindy Wooden Catholic News Service VATICAN CITY (CNS) -- Archbishop Gualtiero Bassetti said a parishioner told him he'd been named a cardinal by Pope Francis, and "my jaw dropped" when he found out it was true. The 71-year-old archbishop of Perugia-Citta della Pieve and president of the bishops' conference of Umbria in central Italy said he was not informed before Pope Francis told the world Jan. 12 that he would induct Cardinal-designate Bassetti and 18 others into the College of Cardinals Feb. 22. The cardinal-designate told the same story to several Italian newspapers: "I was in a church in Perugia to administer the sacrament of confirmation to 80 young people; after Mass, one of the women in the parish, rushing and out of breath, told me the pope had just named me a cardinal. "Like the apostles who didn't believe it when the women brought them news of the Resurrection, I didn't believe it until I verified it with my own eyes by looking on the Vatican website," he said. "I almost fainted." Cardinal-designate Bassetti will be the first cardinal from Perugia named in 160 years, Italian newspapers reported. The last Perugia bishop to wear the red hat, Cardinal Gioacchino Pecci, became Pope Leo XIII in 1878. The fact that Pope Francis chose him and not the archbishops of the traditional cardinal sees of Venice and Turin was widely interpreted as evidence the pope was focusing on people rather than places in making his choice. "Maybe the pope wanted to underline the value of being a pastor rather than the history of a diocese," the cardinal-designate told Avvenire, the Italian Catholic newspaper. Pope Francis had met the cardinal-designate in April when the bishops of Umbria made their "ad limina" visits to report on the status of their dioceses, and the two spent a lot of time together Oct. 4 in Assisi, the Umbrian hometown of St. Francis. In what was seen as another sign of esteem, in December, Pope Francis named Archbishop Bassetti a member of the Congregation for Bishops, which helps the pope name bishops for Latin-rite dioceses around the world. Most members of the congregation are cardinals. Cardinal-designate Bassetti told the newspaper Il Giornale, "Power in the church is service and self-giving, and the pope is giving a witness of this. I'm convinced that a cardinal isn't closer to God, but to the pope and to serving people, especially the least." Born April 7, 1942, in Popolano di Marradi near Florence, he attended the Archdiocese of Florence's minor and major seminaries before being ordained to the priesthood in 1966. After brief service in a parish, he returned to the minor seminary, serving on the staff and eventually becoming rector. Later he was named rector of the major seminary. In 1994, he was named bishop of Massa Marittima-Piombino and four years later was transferred to the Diocese of Arezzo-Cortona-Sansepolcro. Pope Benedict XVI named him archbishop of Perugia-Citta della Pieve in 2009. He serves as vice president for central Italy in the Italian bishops' conference and is a member of the Pontifical Council for Promoting Christian Unity. --- (CNS photo/Alessia Giuliani, Catholic Press Photo)