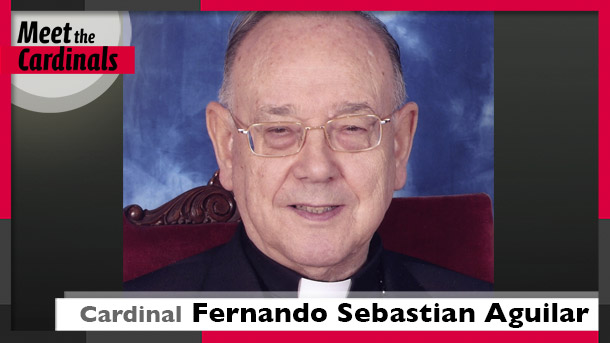 By Ezra Fieser Catholic News Service
SANTO DOMINGO, Dominican Republic (CNS) -- In naming Spanish Archbishop Fernando Sebastian Aguilar a cardinal, Pope Francis chose an outspoken leader who played an important role in developing the positions of the Spanish church over a career that has spanned six decades.
At 84, Cardinal-designate Sebastian, retired archbishop of Pamplona, will be the second-eldest of the 19 new cardinals elevated at a Vatican consistory Feb. 22. His career has been marked by a deep dedication to theology that includes the publication of several letters and books on topics as diverse as stem-cell research to the importance of evangelization to how Christianity can confront terrorism.
"He's a great theologian" who is intellectually and religiously honest, said Father D. Jose Maria Gil Tamayo, secretary-general of the Spanish bishops' conference, in an email to Catholic News Service. "With his analysis, he has had an important role to play in (conference) letters, and he has always been a man of profound democratic convictions."
The cardinal-designate was not available for comment, but in an interview with Spanish newspaper El Sur published Jan. 19, he said he is living in retirement in a diocesan house in Malaga, on Spain's southern coast.
His days consist of praying, reading, writing and celebrating Mass with retired Bishop Antonio Dorado Soto of Malaga, with whom he shares the house.
When asked about being chosen as a cardinal, he told the newspaper, "There are a lot of people who deserved it more than me."
He said he came to know then-Cardinal Jorge Mario Bergoglio in 2006.
"He greeted me by name and I asked him how he knew me," Cardinal-designate Sebastian told the newspaper. "He told me that he'd read all my writing and that he was a student of mine. That gave me great joy."
Born in Spain Dec. 14, 1929, Fernando Sebastian Aguilar joined the Claretians at the age of 15. He was ordained in 1953 and earned his doctorate in theology from the Pontifical University of St. Thomas Aquinas in Rome four years later. He wrote his dissertation on the divine motherhood of Mary.
During his career, he has moved in and out of important roles, founding a prominent Catholic magazine, Iglesia Viva, in 1966, and serving as rector of the Pontifical University of Salamanca from 1971 to 1979, when Blessed John Paul II named him bishop of Leon.
In 1982, he was elected secretary-general of the Spanish bishops' conference. A year later, he resigned as bishop of Leon to dedicate more time to the bishops' conference. In April 1988 he was named coadjutor of Granada, and in 1993, he was transferred and became archbishop of Pamplona, a position from which he retired in 2007.
But in retirement, he has emerged as a source of controversy in Spain for his comments on homosexuality.
The Spanish and international media have focused on comments he made a week after being named cardinal when he said in an interview: "It is one thing to display welcoming and affection to a homosexual person, and something else to morally justify the exercise of homosexuality. I can tell one person that has a certain deficiency that it is what it is, but this does not mean that I stop caring for him and helping him."
The bishops' conference did not respond to questions about his statement.
---
(Photo: Archdiocese of Pamplona and Tudela)