Marching for Life: A Catholic gig? 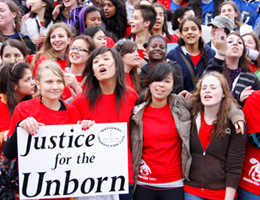 One week ago, about ten thousand Canadians marched on Ottawa’s Parliament Hill in defense of life. For many participants, the day started at the Cathedral of Notre-Dame with mass, presided over by the city’s Archbishop Terrence Prendergast, S.J. He was joined by a dozen of his confreres, including Cardinal Marc Ouellet of Quebec City and Archbishop Luigi Ventura, apostolic nuncio to Canada. During their plenary session last fall in Cornwall, the Canadian bishops agreed that it was important that they have a strong presence at this year’s march, in particular because it was the 40th anniversary of the omnibus bill that put the unborn in legal limbo and decriminalized abortion.
The bilingual mass kicked off the day on a high note, with statements from both the shepherds of Toronto and Quebec City. “It is time to react to the moral crisis that our country is going through in terms of value and right to life. It is time to speak up and request justice for the victims. It is time to act for the culture of life to come back”, declared the Cardinal Archbishop of Quebec. The Archdiocese of Quebec chartered two buses for the event making it the largest French speaking contingent ever to attend the rally. Still, the disproportion between English and French speaking participants was staggering. I did meet a few people from Montreal and one from Gatineau, but the question is: how is the pro-life message being spread in Quebec? With the highest rate of abortion in Canada, why is the message not being heard? The national movement organizing the annual rally, Campaign Life Coalition (CLC), is a unilingual Catholic organization and that, of course, colours the whole event. On the topic of life and in the organization of this event in particular, how did we try to reach out to non Catholics, so that they too would march for life? I interviewed an Anglican bishop from B.C. who told me it was crucial for Anglicans to be with their Catholic brothers and sisters, for the right to life is not a Catholic-only issue. I also saw a few people from the Jewish community. If the March for Life is to continue in the future, and it most likely will, the CLC could try to find other partners to help organize it and invite groups of other faiths as well as non-believers. Regardless of language, creed or political allegiance the dignity and intrinsic value of human life from its beginning to its natural end concerns all of us. By depolarizing the issue, perhaps more people would be open to hear about it.