Learning to "encounter": What I took home from the Synod 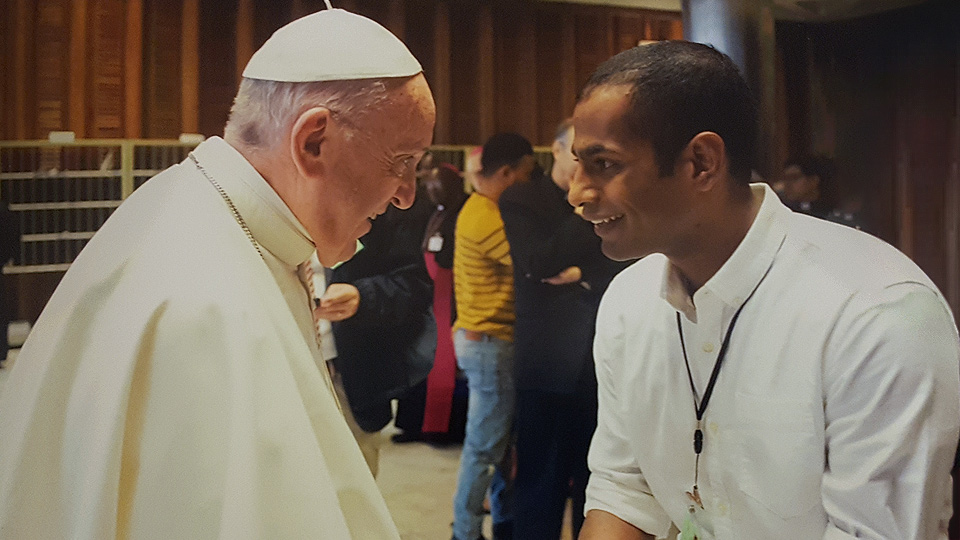 Prevain Devendran meets Pope Francis at the Synod
It has been three and a half months since the Synod of Bishops concluded their 15th Ordinary General Assembly on the topic of Young People, the Faith, and Vocational Discernment. I, along with a few other colleagues at Salt and Light TV, was privileged to spend the month of October with the pope, cardinals, and bishops representing the various Catholic communities around the world, and 36 amazing young adults who were at the centre of the Synod of Bishops. More specifically, Allyson Kenny and I were privileged to spend four weeks documenting the Synod on social media for the Vatican. Our colleagues, Julian Paparella and Emilie Callan also had an important role as Canada’s auditors. 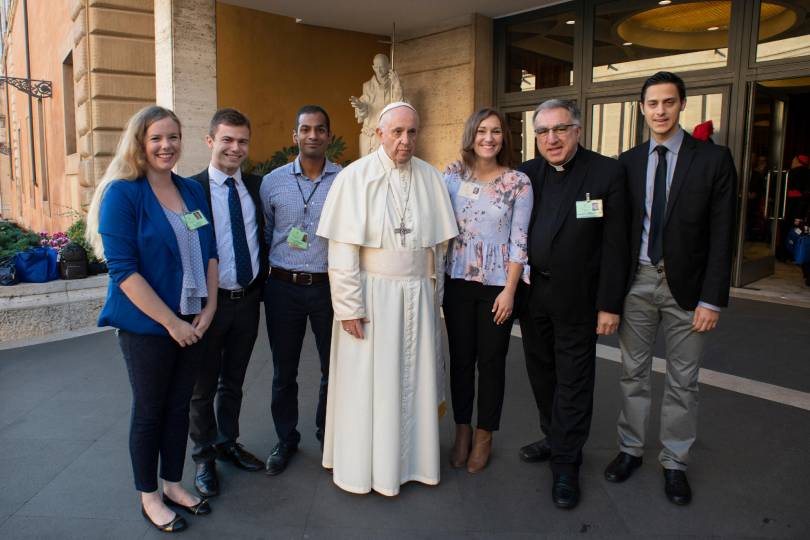 S+L members with Pope Francis at the Synod: (from left to right) Allyson Kenny, Julian Paparella, Prevain Devendran, Emilie Callan, Fr. Thomas Rosica, Matteo Ciofi
In the lead up to the Synod, I had great hopes that this would be a Synod that would finally start the process of reorienting our spiritual leaders to walk with everyday Catholics, and people of good will, in this secular culture that they find themselves in. One only needs to read the headlines to gain a cursory understanding of the state of our world and the challenges in which our youth find themselves situated. Famine, forced migration, war, and climate change are but a few. Racist white nationalism is on the rise in the West in countries that traditionally have been regarded as being formed on Judeo-Christian principles. These nations now illogically see themselves as bulwarks against other religions and in particular against the Muslim faith. Walls, both literally and ideologically, are being built. Countries are creating policies that only seek to isolate themselves, instead of seeking creative avenues to live in solidarity with our brothers and sisters found at the peripheries. Our political leadership casts fear by calling this a “Clash of Civilizations”, when in reality this has resulted from this generation’s lack of human creativity and stewardship. It has arisen from the false promises found in unbridled and unchecked secular capitalism. It has produced a highly productive but depressed people! Mother Teresa said it best when she said:

“The greatest disease in the West today is not TB or leprosy; it is being unwanted, unloved, and uncared for. We can cure physical diseases with medicine, but the only cure for loneliness, despair, and hopelessness is love. There are many in the world who are dying for a piece of bread, but there are many more dying for a little love. The poverty in the West is a different kind of poverty - it is not only a poverty of loneliness but also of spirituality. There's a hunger for love, as there is a hunger for God.”1

Within this context and considering the lack of credibility of our own Church’s leadership in light of the abuse scandals, our youth question - to my mind legitimately - if there is a God. They no longer simply accept the Church's word on it. They rightly question because they conclude God is not found here amidst such misery and hate. So where then does, or should, my hope rest? Perhaps, part of the answer lies in what Pope Francis stated at the Mass closing the Synod. He said to his brother bishops:

“Faith has to do with encounter, not theory. In encounter, Jesus passes by; in encounter, the heart of the Church beats. Then, not our preaching, but our witness of life will prove effective.”

Encounter for Pope Francis is more than just an unexpected meeting or experience. Francis is calling us to a “culture of encounter”:

“not just seeing, but looking; not just hearing, but listening; not just passing people by, but stopping with them; not just saying ‘what a shame, poor people!’, but allowing yourself to be moved with compassion; ‘and then to draw near, to touch and to say: “Do not weep” and to give at least a drop of life’.”2

If we truly believe that the Spirit remains and influences the course of human history, then it becomes our central task to orient ourselves towards being capable of encountering Christ in the world. It is through encountering “the other” that we encounter Christ. Then, I believe, we begin to participate more in what Hans Urs Von Balthasar called the “theodrama”(the unfolding story being told by God) because we are drawing purpose and energy from a God who shapes people for His work, and this goes beyond the limitations of our egos. This mindset of reorientation towards “encounter” was what I took back with me from the Synod, and for me this is an important starting point to enact change. So while I went to Rome hoping to see a dramatic change in the way our bishops engaged with the rest of the Church and with the world, what I found was much more important: a new perspective, a new understanding, and a motivation to put them into action. If even a small part of the participants in the Synod take those gifts home with them and share them with their communities, the possibilities for change within our Church and in our world are endless. But it starts with each one of us. ________________________ 1 Mother Teresa, A Simple Path. 2 http://w2.vatican.va/content/francesco/en/cotidie/2016/documents/papa-francesco-cotidie_20160913_for-a-culture-of-encounter.html