Two Sundays ago, I attended Mass at the Church of the Holy Sepulchre in Jerusalem. The 5:30am liturgy is the first of several of the day; at 7:00am, for instance, the Greek Orthodox celebrate the Divine Liturgy in the same common area, beginning in the Chapel of the Sepulchre and proceeding to their portion of the magnificent, if divided, church. On this particular Sunday morning, I was at Mass for two reasons (discounting the obvious): first, to record the luxurious voices of the Franciscan Friars charged with care of the Catholic portion of the church, and second, because following Mass - scheduled immediately before the Greek Orthodox Liturgy - we were to be given a small window of time to film inside the sepulchre itself, a room so small only three or four pilgrims can fit in at once. 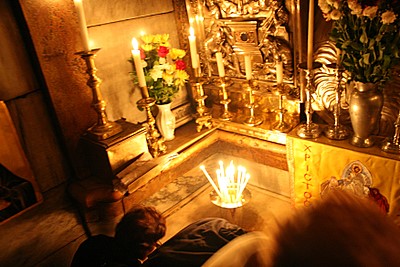 The aforementioned division of the church has been a constant course of embarrassment for the Christian community - and even scandal for the greater cause of unity. The specific division was imposed by the Ottoman Turks of old (who grew weary of the competition for ownership by the Greeks and Catholics, which fluctuated depending on who held the ruler's favour) in a manner rather perplexing to the many pilgrims who descend on the site of Christ's death and resurrection. The church is owned and operated conjointly by the Greek Orthodox Church, the Armenian Orthodox Church, the Catholic Church, the Coptic Church (Egyptian Orthodox), the Syriac Orthodox Church, and the Ethiopian Orthodox Church. Separate chapels and rooms are reserved for specific denominations, with the main attractions, if you will - the Stone of Anointing at the opening of the church, and the Aedicule, the innermost chamber of the Sepulchre - are used by all with strict regulation. Partly due to my fondness for it, and partly in preparation for visiting the Sepulchre, I re-read parts of George Weigel's superb Letters to a Young Catholic (Basic Books), which, among many other things, can be used as a sort of Catholic travelogue. Weigel, whose politics are sometimes suspect but whose religious works are impeccable, writes about the grittiness of Catholicism using the Holy Sepulchre as his example. I'll explain in a minute, but first it is worth quoting Letters at length:

At first blush, it's hard not to think of all this as a shambles - and a disgraceful shambles at that. The noise, the smells, the poor lighting, the rather garish rotunda dome, the barely repressed competition of the various Christian communities... Christians conducting a form of civil war over what they all agree are the most important places in human history? And yet, and yet... you notice, being a Sunday morning, that the Mass being celebrated by the Franciscans is not the usual Mass for that Sunday, but the Mass of Easter... reminded, as you've never before, that every Sunday is Easter, the day of the Lord's Resurrection... Then you kiss the rock of Calvary, and the Stone of Unction, and the Holy Sepulchre itself - and none of the rest makes any difference at all. Then the squawking Copts and the emaciated Ethiopians and the surly Greek Orthodox and the torpid Franciscans all seem somehow transformed. If God came searching for us in history, if the Son of God redeemed us in the flesh, then why be repelled by the grittiness of it all? God wasn't, and neither was God's son.

Weigel is not condoning the divisions and occasional violence that confront pilgrims to the Church of the Sepulchre. Rather, he is suggesting that in the bigger picture, it doesn't matter, because Christ has redeemed the world in its grittiness, not despite it. We can look at this grittiness in several ways. Grittiness within religion is unique to Christianity, in that the stuff of the universe, physical matter - like bread, water and oil - are used by God in the sacraments to impart his grace. Ultimately, the grittiness of Catholicism is to show the importance of the physical universe. In some religions of past and present, the ultimate goal was to remove oneself from the physical world, to experience nirvana or ecstatic contemplation free from physical boundaries. In gnosticism, Christianity fought a foe that claimed physicality was an illusion and therefore of no consequence. (Relativism is the best example of a gnostic revival, with its claim that nothing has meaning and what we do in life is ultimately purposeless.) Yet God came to live in this grittiness, in the frail human form. By His Incarnation he deigned to be born in a smelly, dirty, cold stable. Emmanuel, God-with-us, showed by his birth that a gritty humanity has dignity and worth beyond measure. 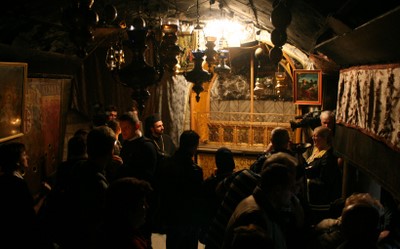 The grittiness of the Incarnation can be seen in an immediate way with a trip to the Church of the Nativity, in Bethlehem. Like the Church of the Holy Sepulchre, the Church of the Nativity is parceled out between the Greek Orthodox, the Catholics (represented again by the Franciscans) and the Armenian Orthodox. On weekdays, morning liturgies celebrated in the Grotto of the Nativity begin at 5:30am and finish at 9am. The Greeks go first (the Grotto being situated within the body of the Greek portion of the church), with the Catholics second and the Armenians last. If you are lucky enough to be first in line, following the Armenian Liturgy you will see a young Orthodox priest sweeping the thirteen semicircular steps descending into the cave of the grotto, held by tradition to be the very place where Christ was born. The voluminous amount of dirt and grime is the remnants of the many thousands of pilgrims who trod those steps the day before. Grittiness tracked in by Christians seeking the face of the Incarnation, encountering the grittiness of human divisions in a holy site which, ultimately, doesn't matter an ounce because by His Incarnation, God redeemed the grittiness of the world.