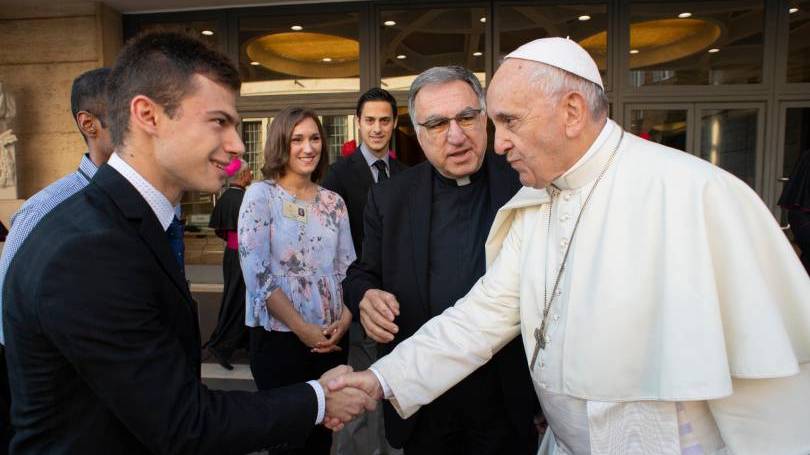 Synod of Bishops on Young People, the Faith and Vocational Discernment

Dear Holy Father, Synod Fathers, brothers and sisters, I am grateful to address you today as a young person from Canada, in connection with paragraphs 175-177, “An Evangelical Vision of Christian Community.” In my experience as a young person in ministry to young people, I have learned that what I say about God, about His love, about Jesus Christ means nothing if I do not witness to God and His love in Jesus Christ in my own way of being and acting. Saint Paul VI pointed out that modern man listens more to witnesses than to teachers (cf. Evangelii Nuntiandi, no. 41). This need for witnesses is even more decisive for young people: we are attracted by authentic witness; we are pushed away by contradictory counterwitness. I offer you the example of my first cousin. Like me, he was baptized, confirmed, and studied in Catholic schools. At some point, he stopped regularly practicing his faith and was married outside of the Catholic Church. When his first child was born, he returned to his parish and requested baptism. The pastor told him that his baby could not be baptized unless his marriage was convalidated. Does such a conditional welcome witness to the unconditional love of God? Does it reveal the Good Shepherd who rejoices as He raises the lost sheep onto His shoulders? Where is the delight of the woman as she finds her lost coin? Where is the compassion of the Father as He runs to embrace His prodigal son? (cf. Luke 15) Jesus reveals the merciful face of the Father (cf. Pope Francis, Misericordiae vultus, 1). Jesus met people where they were at, touched their hearts, and healed their wounds. Young people in our world are thirsting for Jesus, whether they know it or not, and Jesus is thirsting for young people. Does the Church of our day quench this mutual thirst? Do we reveal Jesus to the world? Are we the field hospital that springs into action, performing emergency surgery, or are we the stingy insurance company that requires more documentation before reimbursing a claim? In Evangelii Gaudium, you, Holy Father, state that “Realities are greater than ideas” (no. 231). Where young people are at is more important than where we would want them to be. God is with us where we are at, why should the Church not be there with us – to understand us, to accompany us, to lead us to encounter Jesus, to empower us to be His missionary disciples? As we have heard repeatedly during this synod, welcoming young people and walking with them, listening to them and learning from them, even being evangelized by them, these are not things that happen automatically in our Church. For this we need a significant change in the way that the Church forms her ministers, both ordained and lay. We need seminarians, religious, and lay ministers to be formed after the merciful, compassionate heart and pastoral approach of Jesus Himself that we find in the Gospels. For this I strongly recommend that seminarians and lay people be formed together in the same institutions, becoming equipped as evangelizing missionary disciples together as one Church, to be able to form and empower their fellow baptized to live as missionary disciples in our world today and together to be a Church that manifests the person of Jesus by what she says and what she does. My own faith in Christ and service to the Church have flourished when people in the Church have encouraged, trusted, and empowered me as a disciple and witness of Jesus. We young people need the same so that we can be welcoming to embrace our fellow young people and the world. I thank you.