John Paul II - I Kept Looking For You. 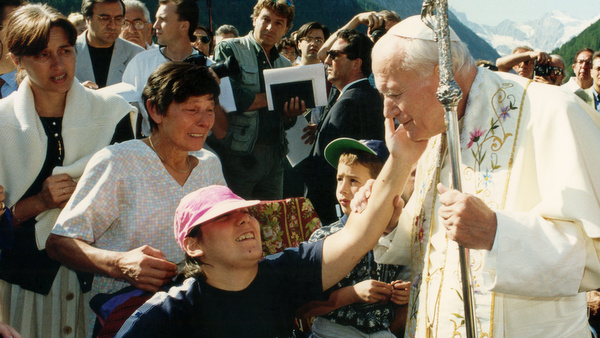 On the promotional cover for the documentary John Paul II – I kept looking for you the caption reads, “The World’s Biggest Documentary about the New Saint”… now, usually, I would say that’s just marketing hype, but in this case the documentary lives up it. Once you get past the English dub, which I’ll admit is wooden and confusing at first, this documentary is hands-down one of the best, no, I take that back, it's the best JP II doc I’ve ever seen. Telling the story of Pope John’s Paul’s papacy is no small feat. The fact alone that he was the most traveled pope in history meant that the documentary makers would shoot at 120 locations, in more than 13 countries. The interviews include an all-star lineup with prominent cultural figures, actors, fashion designers, and important religious figures such as the 14th Dalai Lama, the Head Rabbi of Israel (1993-2003) and the Patriarch of Constantinople, Bartholomew I. Coupled with some of the rarest and most extraordinary archival footage of Pope John Paul II to date. All this to say that once you watch it, you’ll feel as if you've lived every moment of this great man's papacy again. By the end of it, I was crying without shame... and considering I screened the documentary at work, all I can say is that I was overwhelmed with emotion! Make sure you have a box of tissues. In all seriousness though, this documentary not only struck at the core of who Pope John Paul II was, but what he meant for all of us. It’s a documentary which will leave you thanking God, and without a doubt that this man was a modern day saint.
Relive the inspirational story of our newest saint: Saturday, April 26th @ 8:30 pm ET / 5:30 PT
Photo description: Pope John Paul II greets a young person during his 1994 vacation in Val D'Aosta, Italy. (CNS/Arturo Mari)