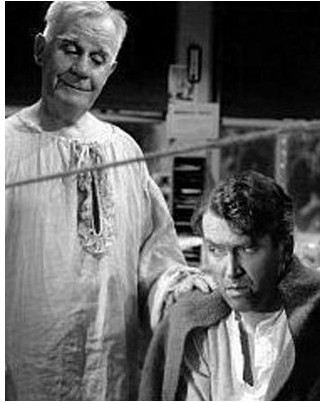 This past Christmas I watched the classic film It’s a Wonderful Life for the umpteenth time. It’s a film I have never grown tired of just like I never grow tired of Christmas turkey, presents under the tree and Panettone.
I have always been inspired by Jimmy Stewart’s gripping portrayal of George Bailey, the down on his luck family man who represents the best qualities of our human nature while also showing us the temptation to despair that exists in each and every person. This year after taking in the film I felt inspired to learn more about the man behind George Bailey. I often wondered how Jimmy Stewart could be so convincing in the role. In one of the most gripping scenes in the movie Bailey stands at the edge of a bridge contemplating suicide as he cries out in prayer “God … God … Dear Father in heaven, I’m not a praying man, but if you’re up there and you can hear me, show me the way. I’m at the end of my rope. Show me the way…?" Stewart is beyond convincing in the scene and perhaps that stems in part from his days as a World War II fighter pilot. It’s a Wonderful Life was Stewart’s first film after serving for four years in Europe where he flew more than 20 combat missions over Nazi Germany. The death rates of fighter pilots were among the highest of all combatants and Stewart was forced to confront his mortality time and time again. The source of his sustenance and hope came in a special letter from his father which included a Bible verse. Stewart kept the letter on him at all times, especially while flying on his dangerous missions. The letter from his Dad read:

“My dear Jim boy. Soon after you read this letter, you will be on your way to the worst sort of danger. Jim, I'm banking on the enclosed copy of the 91st Psalm. The thing that takes the place of fear and worry is the promise of these words. I am staking my faith in these words. I feel sure that God will lead you through this mad experience. I can say no more. I only continue to pray. Goodbye, my dear. God bless you and keep you. I love you more than I can tell you.” Dad.

Psalm 91:1 has often been called God’s 911. It reads, “"He who dwells in the shelter of the Most High will rest in the shadow of the Almighty. I will say of the Lord, 'He is my refuge and my fortress, my God, in whom I trust.'” Psalm 91 encouraged and strengthened Jimmy Stewart as he served his country in war. When he returned home he told his Dad, "What a promise for an airman. I placed in His hands the squadron I would be leading. And, as the Psalmist promised, I felt myself borne up." Ironically one of the most famous depictions of Psalm 91 is that of God covering the frightened with wings. Whether it’s trusting in the Lord during the darkest hour of battle or being saved by the “wings” of Clarence, sometimes art does indeed imitate life.