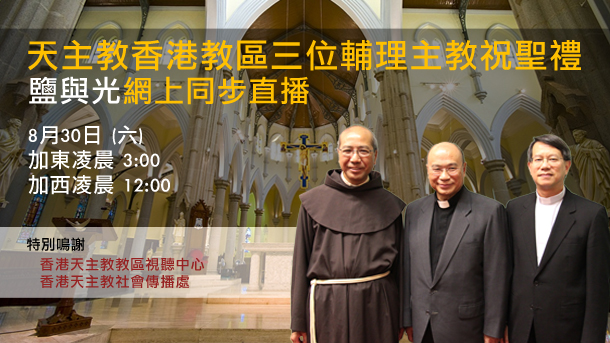 Hong Kong Bishop Ordinations
On Saturday, August 30, there will be three auxiliary bishops ordained in the Diocese of Hongkong. They are Mgr Michael Yeung Ming-cheung, vicar general of the diocese and a member of the Pontifical Council Cor Unum; Mgr Stephen Lee Bun Sang, vicar of Opus Dei for East Asia; and Fr. Joseph Ha Chi-shing, a former superior of the Franciscan Order of Friars Minor in Hong Kong. This ordination of the three Chinese auxiliary bishops will be remembered as one of the most significant events in the history of Catholic Church in China. The most obvious reason is that after August 30, there will be two Cardinals and three bishops serving the 400,000 Catholics in Hongkong: Cardinal John Tong, Bishop of Hongkong, and Cardinal Joseph Zen Ze-kiun, SDB, Bishop emeritus, along with the three new bishops. It is puzzling for Catholics and non-Catholics from outside of the region, especially us in Canada and the US, to understand reasoning behind the Holy Father’s decision to appoint three auxiliary bishops at once, and have five bishops serving a city diocese that does not seem to have a mass number of Catholics. However, it will be much easier to understand the motivation of the Holy Father when we think of the Church in China with 15 million plus Catholics who are under severe persecutions by the government and many bishops and priests are still in jail in under house arrests. The Diocese of Hongkong has always been in unique position especially after the British handed over the sovereignty to the Communist Chinese in 1997. This is one of the only two Catholic dioceses in Communist China that are not being controlled by the Central Government, or does not belong to the government controlled Catholic Patriotic Association. (The other one is the small diocese of Macau. The city was handed over by the Portuguese to the Chinese in 1999.) In other words, the diocese of Hongkong (along with Macau) is the rare one that can preach freely the Good News of the Lord while in full Communion with the Holy Father, the Bishop of Rome. The Hongkong Diocese has played a significant role in confronting the persecutions of the Catholic Church in China. It has sent priests, theology scholars, Bibles in Chinese, books and other much needed resources for the needs of the Catholics in China, the priestly formation, and to serve as communication channels between the Under Ground Church and Rome. The Diocese also works in good faith with the state controlled Catholic Patriotic Association (which does not recognize the Pope as the successor of Peter and leader of the Catholic Church) in hope of converting their political stand against the Pope’s supremacy in the matter of faith and moral and loosening the state control in religious matters. The future of the Church in China and Hongkong are of one. As the Chinese government becomes more aware of the need to connect with the developed countries that value religious freedom and human rights, the role of the Diocese of Hongkong will become more important for it has all of the advantage to serve as a bridge between the Church in China and the rest of the Universal Church.  I urge you all to pray for the Church in China as what Pope Emeritus Benedict XVI has taught us to pray to Our Lady of Sheshen. Sheshen is a mountain outside of Shanghai where a basilica was built and consecrated to Our Lady for her protection of Christians during riots. In 2008, Pope Emeritus Benedict XVI has declared May 24 as the World Day of Prayer for the Church in China. I wish the three newly ordained bishops be full of the grace of our Lord Jesus Christ for all the challenges that they will face in their new roles. Bosco Chan, MTS (St Michaels' College) Aug 29, 2014