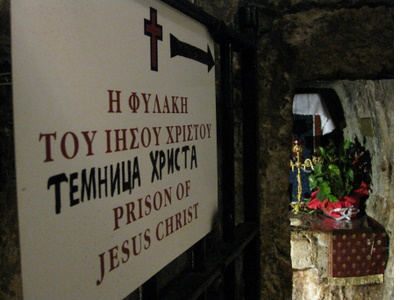 Besides the stations along the Via Dolorosa there are many holy sites to visit – areas where it is traditionally held that Christ was held in prison, where he was scourged, where he was condemned, and so on.
You may have noticed during many of my blogs from the Holy Land, I have referred to sites as “traditionally believed to be where such and such happened.” The fact is we aren’t entirely sure where Christ was held in prison, or which rock he used to multiply the fish and the loaves. We know these things happened, but does the specific location really matter? I would say no. For pilgrims these locations provide us the opportunity to recall these moments from Scripture and meditate on their significance. If the Sermon on the Mount occurred on another mountain along the Sea of Galilee than we traditionally celebrate it to be, does that make a difference? Shouldn’t it be more important that we take the lessons and guidance that are given to us during the Sermon, like the Beatitudes, and incorporate it into our lives? That’s not to say it doesn’t help to visit the Holy Land – it brings Scripture ALIVE! – but we just have to remember that we put our faith in God. 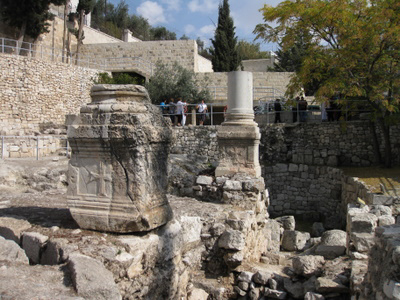 One location we read in Scripture which we can accurately identify is the curing of the man who sat at the medicinal pools for 38-years without anyone to put him into the water. Chapter five of John’s Gospel begins: “Now there is in Jerusalem by the Sheep Gate a pool, in Hebrew called Beth-za’tha, which has five porticoes.” To know for certain that our Lord would have walked here is pretty incredible, but at the same time, as I mentioned above, it is his act of mercy healing the paralytic that is even more incredible, and more profound.

The ruins of the bath are part of a compound cared for by the White Fathers that also features St. Anne’s Church. The Church is built on the location traditionally identified as the house of Sts. Anne and Joachim and thus the childhood home of the Blessed Virgin Mary. St. Anne’s was one of the most peaceful Churches we've visited throughout the entire trip; yes we were greeted by a large group of pilgrims singing Marian hymns, but it set a holy and soothing tone. To visit the crypt, a location, from what I understand, traditionally to be held to be our Lady’s birthplace, was a moment of powerful prayer for me. This location that offered healing in the medicinal baths, was now thousands of years later uplifting and refreshing pilgrims spiritually.