Holy Land: “I appeal to Caesar.”

In Tel Aviv we came across places of worship all within the vicinity of each other – the Mosque on a corner, a Synagogue dating back to the mid-1700s tucked in the Artist’s Quarter, and St. Peter’s Catholic Church along the water front.  It was a contrast of what I had expected – somehow I expected more separation, more tension.  That’s not to say there isn’t any – I’m sure there is some (just like one may have with their neighbours) – but I was expecting something more palpable.

Today’s travels brought us to one place that has been laid claim to by each of the three great monotheistic religions:  Caesarea.  Caesarea was a pleasant surprise for me.  To begin with, its significance did not register with me.   Upon arriving to the location I was stunned by the massive undertaking that it was.  (And for those keeping track this is not Caesarea Philippi up in northern Israel at the foot of Hermon, this Caesarea is along the Mediterranean Sea and is also known as Caesarea Maritima) Shortly after becoming king, Herod the Great, began construction.  The 12 year project, completed around 10 BC included a massive docking area for ships, a hippodrome, an indoor fresh water pool (keep in mind it’s on the Mediterranean!), a palace, an arena, and a temple dedicated to Roman gods.  Herod built it to not only make his mark, establish his legacy, and show his competence as leader, but also to appease the Romans.  After successful Jewish control, around 132 AD the Romans took over the city, just under two hundred years after that marked the Byzantine period, it’s most prosperous time.  The temple was torn down and a Church built on top of it.  Some three hundred years after that, around 638, Muslims took over, and built a Mosque over the Church.  In 1099 the Crusader period began and the city was further rocked with instability.  Finally around 1265 Caesarea was attacked and destroyed by Muslim armies. The ruins are everywhere – from battles and major earthquakes that hit the region.  Ancient pillars and stones lay crumbling as tourist groups filter through. Mosaics that once decorated the floor of buildings are now weather worn, weeds burst through the patterns.  It’s surreal to consider that some 2000 years ago it was a thriving port! The most powerful moment of touring Caesarea came for me when we stood beside the remains of a hall. 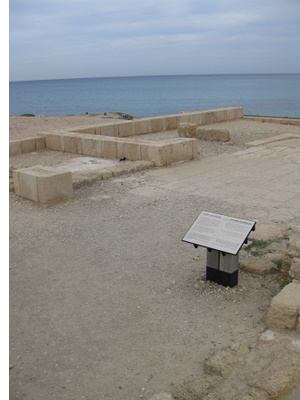 A marker theorizes that the hall may be the location where St. Paul, in the year 58, requested to be tried as a Roman citizen.  You’ll recall, as we read in the Acts of the Apostles (25), Paul had a hearing before Festus:

“When he [Festus] had stayed among them not more than eight or ten days, he went down to Caesarea; and the next day he took his seat on the tribunal and ordered Paul to be brought.  And when he had come, the Jews who had gone down from Jerusalem stood about him, bringing against him many serious charges which they could not prove.  … Paul said “I am standing before Caesar’s tribunal, where I ought to be tried; to the Jews I have done no wrong, as you know very well.  If then I am a wrongdoer, and have committed anything for which I deserve to die, I do not seek to escape death; but if there is nothing in their charges against me, no one can give me up to them.  I appeal to Caesar.”  Then Festus, when he had conferred with his council answered, “You have appealed to Caesar you shall go.” (Acts 25: 6-8, 10-12)

As we celebrate the Pauline year I couldn’t help but think of the amazing possibility that Paul at one time had stood where I was standing.   Regardless of whether or not he had actually stood here didn’t matter, but suddenly Scripture took a very real bent, and the people and places suddenly became something very historical – in the best Scriptural sense of the meaning. That seems to be the common thought that runs through my head on this trip – it seems that every where I go, I’m setting foot in an area that is found referred to in Scripture. The people and places are coming alive!