Today celebrate the Solemnity of Mary, the Mother of God. A week after we have celebrated the birth of our Saviour, we recognize His mother -- Theotokos, God-bearer! It's also an appropriate time to celebrate this feast as we begin the new year. Pope Benedict XVI noted this in his homily on this day four years ago:

At the beginning of a new year, we are invited, as it were, to attend her school, the school of the faithful disciple of the Lord, in order to learn from her to accept in faith and prayer the salvation God desires to pour out upon those who trust in his merciful love. 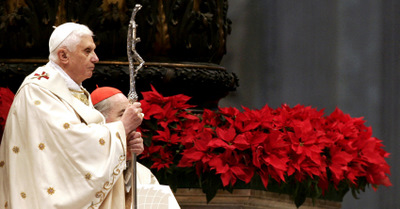 As many make new resolutions, let us include a resolve to imitate our Blessed Mother better: to be more trusting, more faithful, more open to God's love. The Church also marks the World Day for Peace. This year, for his message on the day Pope Benedict XVI focused on the environment. His message, titled If You Want to Cultivate Peace, Protect Creation, offers thoughtful reflection on a number of areas that are not necessarily paid attention to when discussing environmental concerns. One of these areas is the idea that moral decay and neglect for the environment go hand in hand:

Humanity needs a profound cultural renewal; it needs to rediscover those values which can serve as the solid basis for building a brighter future for all. Our present crises – be they economic, food-related, environmental or social – are ultimately also moral crises, and all of them are interrelated. They require us to rethink the path which we are travelling together. Specifically, they call for a lifestyle marked by sobriety and solidarity, with new rules and forms of engagement, one which focuses confidently and courageously on strategies that actually work, while decisively rejecting those that have failed. Only in this way can the current crisis become an opportunity for discernment and new strategic planning. (5)

And similar to his encyclical Caritas in Veritate, the Holy Father also emphasizes that the environment cannot be placed about the dignity of the human person. In paragraph 13, the Pontiff writes:

There exists a certain reciprocity: as we care for creation, we realize that God, through creation, cares for us. On the other hand, a correct understanding of the relationship between man and the environment will not end by absolutizing nature or by considering it more important than the human person. If the Church’s magisterium expresses grave misgivings about notions of the environment inspired by ecocentrism and biocentrism, it is because such notions eliminate the difference of identity and worth between the human person and other living things. In the name of a supposedly egalitarian vision of the “dignity” of all living creatures, such notions end up abolishing the distinctiveness and superior role of human beings. They also open the way to a new pantheism tinged with neo-paganism, which would see the source of man’s salvation in nature alone, understood in purely naturalistic terms. The Church, for her part, is concerned that the question be approached in a balanced way, with respect for the “grammar” which the Creator has inscribed in his handiwork by giving man the role of a steward and administrator with responsibility over creation, a role which man must certainly not abuse, but also one which he may not abdicate. In the same way, the opposite position, which would absolutize technology and human power, results in a grave assault not only on nature, but also on human dignity itself.[30]

To read the Pope's message in full, visit HERE. If you are unable to see our broadcast of New Year's Day Mass, celebrated by Pope Benedict XVI with English translation on January 1st at 10am ET, you may want to check the Vatican Information Service or Zenit in the coming days for the text and summary the Holy Father's homily. On this January 1st, when we remember Mary, the Mother of God let us remember her under the great title Queen of Peace. May she intercede for us, that we may begin the new year with a deep peace in our heart, a renewed commitment to love our God, love our neighbour, and to responsibly steward the gifts that have been given to us. From all of us at Salt + Light Television, have a blessed and healthy new year! - Photo: CNS photo/Dario Pignatelli, pool via Reuters