Halifax Dispatches: Being a Woman of Mercy 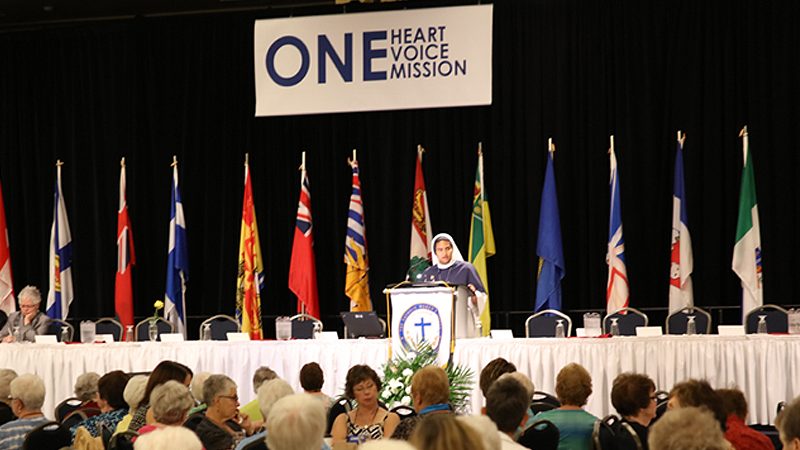 For many the Year of Mercy is a challenge. One finds oneself wondering “how do I do this mercy thing?” While it does entail a certain amount of humility and willingness to let go of oneself, there are some helpful guidelines. Sr. John Mary of the Sisters of Life shared some of the necessary “dispositions of the heart” with the 700 women attending the Catholic Women’s League national convention in Halifax. According to Sr. John Mary there are key “dispositions of the heart” one must have to be a woman (or person) of mercy. These disposition are summed up in three key words: Receive, Delight, and Persevere. Receive In the context of being a person of mercy, to receive essentially means to be present to the person before you, to the day before you, and to place emphasis on being instead of doing. Naturally it also means not running away from whatever is before you, whether it be an unpleasant task or person. Delight Having received the person before you, the next key is to delight in their presence. That doesn’t mean being giddy with laughter, necessarily. (though sometimes it might) Instead it means asking “who is this person before me?” Instead of asking “what should I do for this person?” one should focus on seeing the goodness of the person before them. When one is focused on the goodness of the person before them they are moved to mirror that goodness, even if that person does not recognize their own goodness. Without this disposition any act of goodness can become mechanical, void of love. To borrow the words of Pope Francis, this is the disposition that distinguishes between the church and an NGO. Persevere Having received and delighted does not guarantee that all will be well. But being a person of mercy means not giving up. That might mean continuing to patiently mirror goodness to a person who cannot see their own goodness, or that might mean upholding values that are not popular. The important element is to avoid being discouraged in the face of perceived failures or setbacks. Sr. John Mary gave the example of the current situation in Canada where a law on euthanasia was recently passed saying, “we may have lost the legal battle, but not the spiritual battle.” Want to see what these three things look like in practice? Sr. John Mary offered the French film Marie’s Story as a great way to see this dispositions at work.