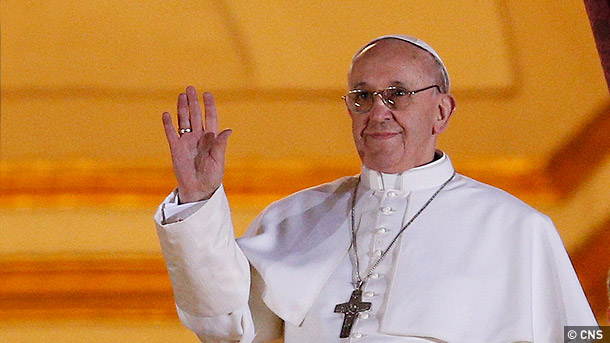 Cardinal Jorge Mario Bergoglio, now Pope Francis, a member of the Society of Jesus, was born in Buenos Aires, Argentina, on December 17, 1936. Serving as Archbishop of Buenos Aires before the papal election, Pope Francis I was ordained a Jesuit priest on December 13, 1969. He completed his studies in theology at the Faculty of Theology of San Miguel, Argentina. He would go on to lecture in theology and act as novice master here after his graduation. From 1973-1979 he worked as Jesuit Provincial, and moved to become rector of the Philosophy and Theology Faculty of San Miguel from 1980-1986. Pope Francis was consecrated as Auxiliary Bishop of Buenos Aires on June 27, 1992, and later appointed Archbishop of Buenos Aires on June 3, 1997. In this capacity he acted as Ordinary for the Eastern-rite in Argentina for those lacking an Ordinary of their own rite. He was elevated to the College of Cardinals on February 21, 2001, by Blessed John Paul II.  Pope Francis has served as President of the Bishops' Conference of Argentina from November 8, 2005-November 8, 2011. He has been a member of the Congregation for Divine Worship and Discipline of the Sacraments, the Congregation for the Clergy, the Pontifical Council for the Family, and the Pontifical Commission for Latin America. - (CNS photo/Paul Haring)