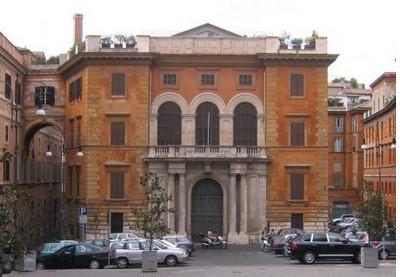 In the midst of all the hard work and writing, an event of biblical proportions took place on Thursday evening.
It took place not in the synod hall, but at a building known to us as “the Biblicum” in Rome’s Piazza della Pilotta, near the Trevi Fountain. It was a reunion and festive dinner at the place that is considered to be the cradle of biblical civilization for many of us. Nearly 80 of those attending the synod -- cardinals, bishops, priests, experts, auditors -- are all graduates of the Pontifical Biblical Institute, known by the locals as the Biblicum. This important Vatican institution, entrusted to and run by the Society of Jesus was founded in 1909 by Pope Pius X (now a saint) specifically as a center of advanced studies in sacred Scripture in order to promote the most effective manner possible to study and understand the Word of God. The biblical institute is now part of the Gregorian Consortium in Rome. For nearly a century, the Biblicum has modeled exegesis and scientific biblical studies of the Scriptures, biblical languages and archeology at the service of the universal Church. I am a grateful alumnus of that institution, as well as of the École Biblique et Archéologique Française de Jérusalem, entrusted to the order of preachers, the Dominicans. Unlike some places these days that don’t necessarily offer Scripture studies in concert with the life of faith and vision of the Church -- places that have justifiably been the cause of concern for some of us at the synod -- the Biblicum has been and continues to be the home of some of the greatest biblical minds and hearts in the Church. One lingering memory I have of many of my Biblicum professors is of going to their offices and finding them praying their breviary or reading Scripture, not for some exegetical exercise, but rather to meet the one about whom the Scriptures speak. At a synod such as this one, when concerns are raised and words are exchanged be about what works and what doesn’t work, the Biblicum elicits in us a hymn of thanksgiving to God for the likes of great Jesuits who have gone before us to the new Jerusalem. Those include: Father Leopold Fonck, founding rector from 1909 to 1930; Cardinal Augustin Bea, rector from 1930 to 1949; Father Ernest Vogt, rector from 1949 to 1963; Father Roderick MacKenzie, rector from 1963 to 1969, and one of my great Old Testament Professors at the University of Toronto. And, of course, we are grateful for those Biblicum people who still embody the biblical vision and hope in the Church today: Cardinal Carlo Maria Martini, rector from 1969 to 1978; Father Maurice Gilbert, rector from 1978 to 1984; Cardinal Albert Vanhoye, rector from 1984 to 1990; Father Klemens Stock, rector from 1990 to 1996; Father Stephen Pisano, rector from 2002 to 2008. Father Stock, Father Gilbert and Father Pisano are all experts at the current synod on the Word of God. The evening also afforded us the opportunity to welcome the new rector to the Pontifical Biblical Institute: Spanish Jesuit Father José María Abrego de Lacy. In the midst of the synodal deliberations, consternations and frustrations, Thursday night allowed nearly 60 Biblicum survivors to return to the source and meet once again many of the great Jesuits who taught us to love the Word of God and how to live our lives in the home of that Word. - Basilian Father Thomas Rosica is the Vatican's English-language press attache for the 2008 world Synod of Bishops. A Scripture scholar and university lecturer, he is the chief executive officer of the Salt and Light Catholic Media Foundation and Television Network in Canada, and a member of the General Council of the Congregation of St. Basil.