“God of Life, Lead Us to Justice and Peace” 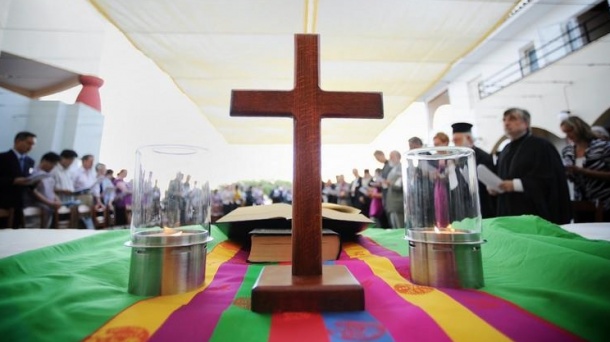 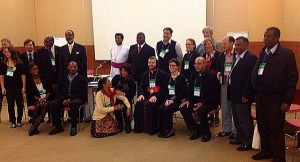 Delegates at the WCC's 10th Assembly after a bible study session
The theme of the 10th Assembly of the World Council of Churches was, “God of Life, Lead us to Justice and Peace”. This 10th Assembly, held in Busan, Korea, was remarkable in any number of ways – great guest speakers from the Jewish and Evangelical traditions, great participation by Orthodox traditions, the global south, women, youth and delegates with visible disabilities AND the largest official delegation of Roman Catholics in the history of the World Council of Churches. The Roman Catholic tradition does not officially belong to the WCC, though it does sit on the Faith and Order Commission and gives financial support to the WCC which has, since 1948 been bringing together 345 different Christian denominations. But this year there were 27  official RC observers at the Assembly of 4000 participants from 100 countries around the globe. (Canada is one of the few church councils in the world to which the RC tradition belongs – an active, vital membership which is tremendously enriching to the CCC.)
There are many remarkable things about the WCC Assembly, though there are, of course, challenges too as there must be in any bringing together of the Body of Christ on that kind of scale. One of the greatest joys for me is the opportunity to reconnect with my colleague general secretaries from the regions of the world and from national church councils.
It was with a sense of tremendous privilege that I reconnected with the General Secretary of the Hong Kong Christian Council, The Rev. Po Kam-cheong, and received from him their annual report. A beautifully-produced document, bilingual, of course – Chinese and English – detailing their mission on the front page. “The Hong Kong Christian Council is the ecumenical body of Christian churches, organizations and institutions in Hong Kong. Founded in 1954, the Council promotes a united witness and outreach to the whole society. It is the visible sign of church unity in Hong Kong, promoting the spirit and work of the ecumenical movement.”
What also really struck me was the report of their Church Unity and Relations Committee. The very first item in that report is a detailing of the various worship services that were held to mark last year’s Week of Prayer for Christian Unity, the pulpit exchanges that happened and the Joint statement that was issues by the Committee, the Hong Kong Catholic Diocesan Ecumenical Commission and the Orthodox Metropolitanate of Hong Kong and South East Asia. Such vital engagement in the ecumenical witness to unity in the Name of Christ. I am eager to see what the Hong Kong Christian Council does to mark the 2014 Week of Prayer for Christian Unity with its focus on Canada. I am eager to see what we do here in Canada!
---
Cover Photo: WCC/Mark Beach
Bible Study Photo:  Dr. Rev. Karen Hamilton