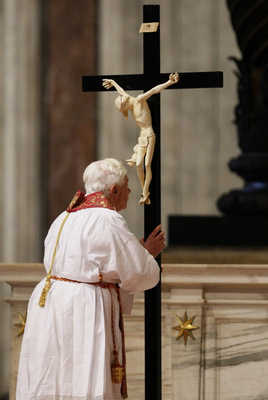 Ecce lignum crucis, in quo salus mundi pependit. Venite, adoremus. Behold the wood of the cross, on which hung the Saviour of the world. Come, let us worship.
Father Raniero Cantalamessa, OFM Cap., quoted that familiar refrain as he concluded his homily at the Good Friday liturgy. The Papal household preacher delivered the homily, as has in the past on this solemn day. Father Cantalamessa, who will also be featured in next month's Nothing More Beautiful, encouraged the faithful to proclaim that refrain with greater conviction and gratitude because despite the sufferings we experience now, God has saved us and "loved the world so much that he gave His only-begotten Son" (John 3:16).

What do you do to reassure someone that a particular drink contains no poison? You drink it yourself first, in front of him. This is what God has done for humanity: he has drunk the bitter cup of the passion. So, human suffering cannot be a poisoned chalice, it must be more than negativity, loss, absurdity, if God himself has chosen to savour it. At the bottom of the chalice, there must be a pearl. We know the name of that pearl: resurrection!

The Capuchin made a number of references to the earthquake in Japan and read a moving quote from Shahbaz Bhatti, the Catholic Pakistani minorities minister who was assassinated in March for his beliefs. About the slain politician he said:

His testament is a legacy to us, his brothers and sisters in the faith, and it would be an act of ingratitude to allow it to be quickly forgotten. 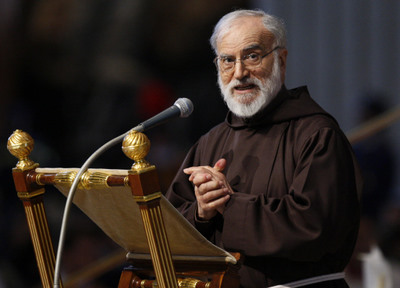