Full of Grace: The Feast of the Immaculate Conception 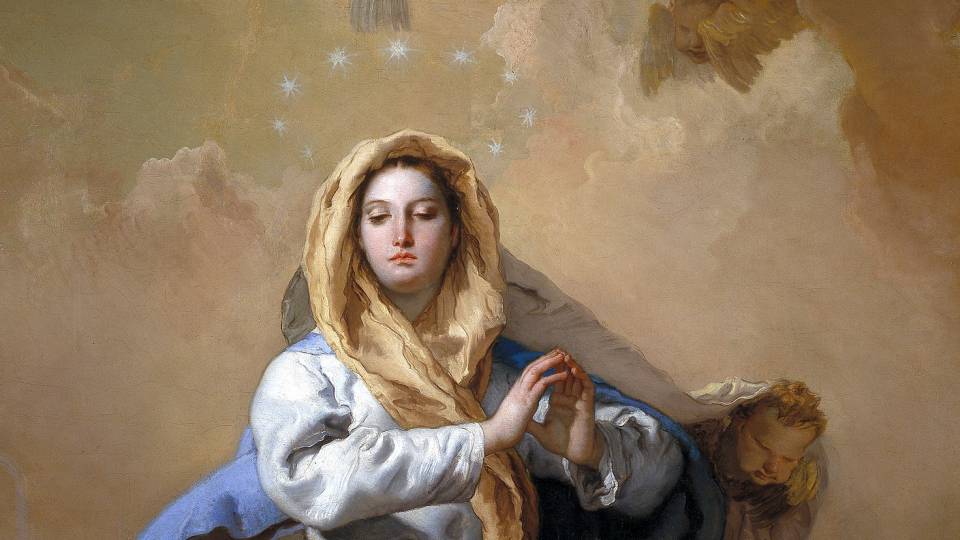 Detail of The Immaculate Conception by Giovanni Battista Tiepolo. Source: Wikimedia Commons
The Feast of the Immaculate Conception of the Blessed Virgin Mary is one of the most prominent Marian feasts in the Catholic Church, but also a tricky one when it comes to relationships with other Churches. Even the other traditions that venerate the Mother of God are hesitant to refer to her conception as “immaculate,” although there is a long history of this teaching within western Catholicism. The origins of this teaching, and the solemn feast associated with it, are complicated. Different traditions have varying interpretations about Our Lady and her relationship to sin, but they all share the view that the woman chosen to be the Mother of God was exceptionally pure and holy. In 1854, Pope Pius IX declared the teaching about Our Lady’s immaculate conception to be dogma, giving it the highest level of authority by making it an infallible teaching. This seems rather late in the course of Church history, but the Assumption of Our Lady wouldn’t become dogma until 1950, nearly a century later. Important theological teachings are sometimes present in the Church for a long time before they become official doctrine. The idea that the Blessed Virgin Mary was conceived without sin has existed for centuries, but it was not necessarily present from the earliest days of Christianity. It developed over time in relation to other theological teachings, in particular, the teaching of original sin. A feast day celebrating the conception of the Mother of God is thought to have begun in the East from around the 7th or 8th centuries. It was not specified at this point that Our Lady’s conception was “immaculate,” meaning that she was without original sin from the moment she was conceived in her mother’s womb. St. Augustine of Hippo and his understanding of original sin is not nearly as prominent in Eastern Christianity as it is in the West, so it wasn’t until the feast day made its way into the Western Church that the notion of the Immaculate Conception began to develop. According to the 1962 St. Joseph Daily Missal, the Feast of the Conception of Our Lady entered the Western Church around the 11th century, when it first appeared in England. From there, it spread to France, Germany, and throughout Europe. By the 14th century, it was on the calendar of the Universal Church. I don’t know exactly when Our Lady’s conception began to be thought of as “immaculate” in the West, but it’s safe to assume it developed out of the influence of St. Augustine and the idea that the Mother of God was exempt from the hereditary sin originating from Adam’s disobedience. Since the Eastern Church doesn’t share the same view of original sin as being a stain on the soul that is biologically transmitted, they don’t refer to the Virgin Mary’s conception as “immaculate.” As Bishop Kallistos (Timothy) Ware explains in his book, The Orthodox Church, the Mother of God is called All-Holy, Immaculate, and Spotless in Eastern Orthodoxy, which seems to come close to Catholic Marian dogma. The Orthodox Church rejects the official Catholic teaching on the Immaculate Conception only because it seems to separate the Virgin Mary from the rest of humanity and the other righteous men and women from the scriptures in the way God preserved her from sin. In the Eastern view, identifying Our Lady’s conception as “immaculate” isn’t heretical, just unnecessary. One of the most influential events that affirmed the teaching of the Immaculate Conception in the Catholic Church was the apparition of Our Lady of Lourdes to Bernadette Soubirous in 1858. In one of her appearances, Our Lady declared, “I am the Immaculate Conception,” a statement Bernadette did not really understand, but it seemed to confirm the validity of her visions, considering she was thought to be a simple-minded girl without much knowledge of Church teaching. Since the Immaculate Conception had become a recognized dogmatic teaching only a few years before the Lourdes apparitions, it is possible that Bernadette had had some awareness of it and subconsciously internalized it somehow. Or perhaps, as most Catholics believe, Our Lady really did speak to St. Bernadette. The Solemnity of the Immaculate Conception of the Blessed Virgin Mary breaks with the penitential simplicity of the Advent season to give us a chance to celebrate the Mother of God, through whom the incarnation of the Word of God was made possible. It celebrates her nature as a holy and sinless woman from the time of her conception, and Our Lady gives us a model of a life without sin in conformity with God’s will. As she is such an important figure in the Advent and Christmas seasons, the feast of her conception allows us to honour her as we prepare for the coming of her Son. 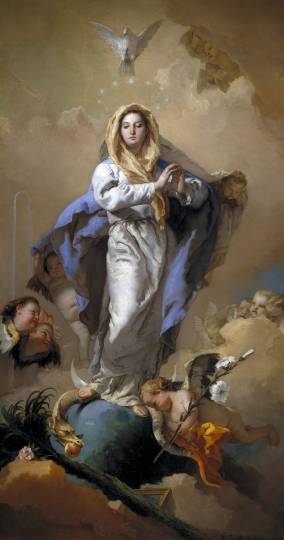