From Prairie Priest to Bishop

There’s just something about people from the prairies. 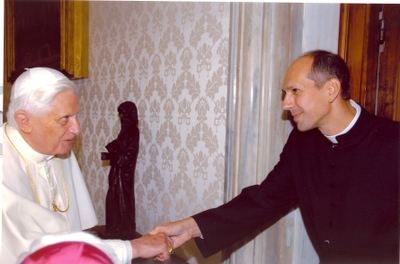 Maybe it is the familiarity, and the feeling that everyone is a neighbour. Or it is the humility that comes from knowing their place under the grandeur of the endless sky. Perhaps it is the gentleness of the people who see life begin with just one kernel of grain in the soil, but who have the strength to withstand both the winter’s windchill and the summer’s blazing heat. Somehow it all adds up to something. And no matter where in Canada you are from, I’m certain you would say that in unison along with me after meeting Monsignor Donald Bolen. There is just something about people from the prairies. Friendly. Humble. Thoughtful. Gentle but strong. With all these characteristics in his possession, Msgr. Bolen, born and raised in the prairie town of Gravelbourg, Saskatchewan, will be ordained as Saskatoon’s seventh Bishop on March 25, 2010. And Salt + Light Television is pleased to give you the opportunity to meet this prairie priest in the days leading up to his Episcopal Ordination.  Join Fr. Thomas Rosica as he interviews Msgr. Bolen in an episode of Witness on Sunday, March 21st, 8pm ET. In preparation for our coverage, I had a chance to interview Msgr. Bolen and talk to him about his varied experiences as a priest and his appointment as Bishop. Msgr. Bolen was ordained to the priesthood on October 12, 1991 after studying at St. Paul Seminary in Ottawa for the Archdiocese of Regina. He has since served in a number of Saskatchewan parishes, but has also spent seven years in Rome on the Pontifical Council for Promoting Christian Unity. His ecumenical work continued when he returned to Regina and began serving on the Archdiocesan Ecumenical Commission. He is also an Associate Priest of the Madonna House Apostolate and an Oblate of St. Peter’s Benedictine Abbey in Muenster, Saskatchewan. “Over my years as a priest, I’ve been called to many things and through that process learned ever more deeply to trust the Church and trust that God speaks through the authoritative structures of the Church. So when the call came from the Nunciature – a telephone call that changes everything – I could hear God’s voice in that call.” Helping him to hear God’s voice was that the call from the Nunciature came on December 8th, the Feast of the Immaculate Conception. Later, as Msgr Bolen celebrated Mass, he was encouraged by the words of Mary: “Let it be done to me according to your will.” “This was a moving part of that process and allowed me to see God’s hand in it.” Msgr. Bolen’s Episcopal Ordination will be Thursday, March 25, the Feast of the Annunciation. Salt + Light Television is happy to take viewers to the prairies. We’ll stream the ordination live on our website and bring you extensive coverage of the events in Saskatoon. Stay tuned for more information, dates, and times of our programming. You won’t want to miss it. There is, after all, just something about the people from the prairies.