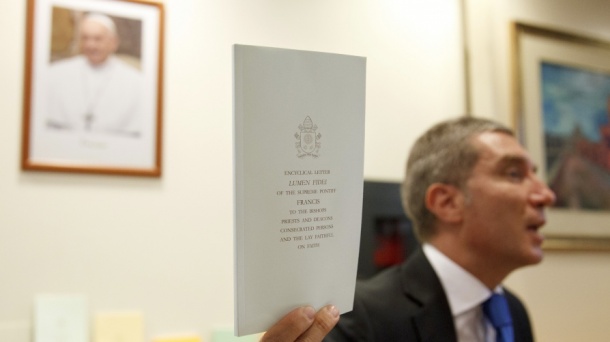 Pope Francis’ first encyclical is a beautiful invitation to believers and seekers alike.  While Lumen Fidei is officially addressed to bishops, priests, members of religious orders and “the lay faithful,” it is also a heartfelt attempt to speak to anyone still searching for God.
There is probably little that will be deemed “newsworthy” in Lumen Fidei, save perhaps the strong linkage between faith and “justice, law and peace” which reflects Francis’ emphasis on the poor.  Another section speaks explicitly of great figures, like St. Francis of Assisi and Mother Teresa, whose faith impelled them to work directly with the poor.  Some commentators may try to parse which pope—Benedict or Francis—wrote which part, rather than looking at the document in its totality.  A few may even try to discount one or another part, based on the putative author.  But that would be a fool’s errand: if anything the encyclical should enjoy greater influence as the work of two popes.
While many passages will provide material for rich meditation for Catholics and Christians, I would like to highlight a few that might specifically help the seeker, the doubter, the agnostic and even the atheist.
“Faith is born of an encounter with God,” writes Francis.  That is, faith is not simply an intellectual process, or the answer to a series of philosophical questions, but is primarily about a relationship—with God, with Jesus, and with others.  We can see, says Francis, the progress of that relationship throughout history, in the story of salvation, which begins with Abraham.  So for seekers despairing of “figuring out” faith, the pope offers not a philosophical disquisition or a theological debate, but a person: Jesus.  Faith is, he says, “a participation in his way of seeing.”  We seek to enter into relationship with him.
But that doesn’t mean that the intellect is unimportant.  For seekers who worry that becoming a Christian will mean leaving their brains behind, Francis highlights the value of the intellectual path, and reminds us of the experience of St. Augustine.  Encountering God did not lead Augustine to “reject light and seeing,” that is, reason.  Still, our longing for the truth will only be satisfied when “we will see and will love.”
For, as the pope says, “Love is an experience of truth.”  For those still searching for God, then, Francis encourages them to meditate on their experience of love, not simply as an ephemeral emotion, but as a way of tasting faith and experiencing truth, both of which can lead to faith.  As we reflect on the love that God has shown us in our lives, as the People of Israel did over history, we slowly come to belief.  And in a beautiful line that will speak to many seekers, the pope says: “To the extent that they are sincerely open to love and set out with whatever light they can find, they are already, even without knowing it, on the path leading to faith.”
To that end, faith is a journey.  Lumen Fidei speaks of the “path” and “road which faith opens up before us.” In other words, don’t be afraid to keep looking.  “Religious man is a wayfarer,” says Francis (and I would add religious woman, too), “he must be ready to be led, to come out of himself, and to find the God of perpetual surprises.”
So to the seeker Francis says: Don’t be afraid to use your intellect, see what love can teach you about faith, and stay on the path.  Then one day, you may be surprised to discover that you are in a relationship with God and, more important, that God is in a relationship with you.
James Martin, SJ is editor at large at America. For further articles and reaction to the encyclical, visit americamagazine.org/light-faith or the  America homepage. For more from Fr. Martin, visit his blog, "In All Things."