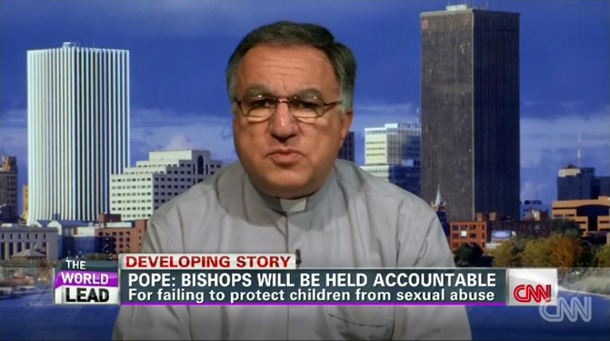 This week,  Pope Francis met with six people who were abused by priests at some point in their lives. The three men and three women attended a special private Mass at the Santa Marta Residence, had breakfast with the pope, and then met with the Holy Father individually. The meeting raised certain questions: will true accountability from the clergy change anything?  Our team has been interviewed by several media outlets about the meeting and the issue of clerical sex abuse.  Fr. Thomas Rosica, Salt + Light CEO,  spoke to Jake Tapper on CNN's The Lead with Jake Tapper on July 7th. Below is the CNN article and interview:

(CNN) – Pope Francis begged for forgiveness and promised accountability in the sprawling sex scandal that has plagued the Catholic Church all across the globe, and across generations.
Francis Monday held what were reportedly emotional meetings with six victims of abuse, hailing from Britain, Ireland and Germany. "I beg your forgiveness, too, for the sins of omission on the part of church leaders who did not respond adequately to reports of abuse made by family members, as well as by abuse victims themselves," the pope said in a private mass. The new accountability measures "means that all bishop conferences, religious superiors are obligated, are required to deal with the situation, to address it, to deal with perpetrators, to care especially for victims," said Father Thomas Rosica, English language assistant at the Holy See press office. "When they don't do that, certain disciplinary actions will be taken," he said. For more of our interview with Father Thomas Rosica, check out the video below.