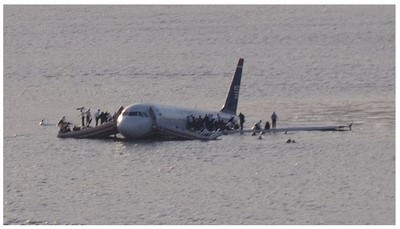 My mind was already on air travel when news broke of "the Miracle on the Hudson"--last Thursday's casualty-free crash of U.S. Airways Flight 1549. In my quest for a cheap ticket for Rome, I had been searching the airline's website that morning. According to one source, the odds of dying in an plane accident are a mere 1 in 20,000. (Asteroid impact: 1 in 200,000.) That said, once the plane is going down, your chances of survival become rather slim. This is why every air traveler, whether it's just before take-off or during the descent, if only as a passing thought, quietly ponders just what they would do if the unmentionable happened. Of course, you and I can only speculate whether we would close our eyes serenely or, hyperventilating, grab the arm of the stranger next to us, regretting that we hadn't at least attempted a little small talk beforehand. Having survived the real thing, the passengers of Flight 1549 can actually testify to the lived experience.

The plane was quiet except for a couple of emotional outbursts, but nothing major. The only words I recall [the pilot saying] were, 'Prepare for impact.' I looked out the window and thought, there is a good chance we are going to die. I thought about my family and started praying. - Fred Berretta (Source: FOXnews.com) There was a big bang. I prayed and prayed and prayed. Believe me, I prayed. I knew we were going to crash. The question was: how close to the buildings were we going to be? Honestly. I thought we were all going to die. ... I kept thinking to myself, 'I didn’t get a chance to tell my family I love them.’ - Elizabeth McHugh (Source: Telegraph.co.uk)

We feel for Fred, Elizabeth and the other 153 survivors who endured pure terror. But might we also envy them?--for their profoundly good fortune, sure, but more so for the new lease on life that we imagine such an experience would bring. To survive a plane crash, would this not make laughable the obstacles of fear, self-consciousness or routine that we've meekly surrendered to, preventing us from truly living in the freedom of Christ? Must we experience that plane crash to do so ourselves?