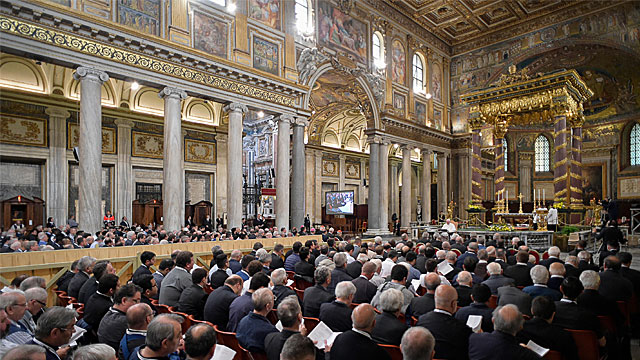 On the occasion of the Jubilee of priests and seminarians (June 1-3, 2016), Pope Francis will preach today three reflections during the retreat for priests and seminarians gathered in the Papal Basilicas in Rome. The theme of the retreat is “the Good Shepherd: the priest as a minister of mercy and compassion, close to his people and servant of all.” The Pope delivers the three meditations, one after another, in the Basilicas of St. John Lateran at 10:00 a.m., in the Basilica of St. Mary Major at noon, and in the Basilica of St. Paul Outside the Walls at 4:00 p.m. The assembled priests and seminarians in the Roman Basilicas are able to follow the Pope thanks to the video link provided by the Vatican Television Centre. The public will be able to follow Pope Francis’ meditations for the clergy on major national and international Catholic television networks and in streaming on the official Jubilee of Mercy website: www.im.va. Streamed video will be offered in the original Italian and with simultaneous translations in English, French, Spanish, Portuguese, German and Polish. The Jubilee celebrations will conclude with a Holy Mass presided by the Holy Father on Friday 3 June in St. Peter’s Square. What follows is the first of the three meditations given this morning at 10:00 a.m. Rome time in the Basilica of St. John Lateran.