Face to Face with Pope Francis 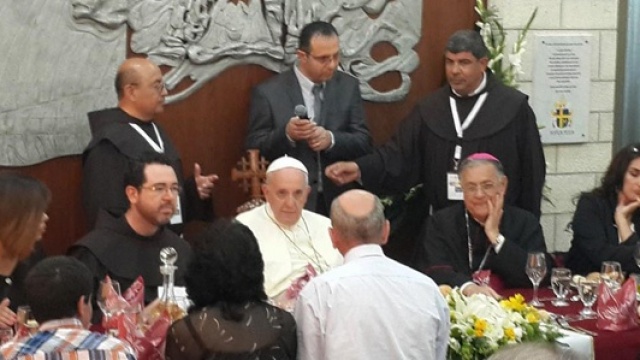 Pope Francis listens as CNEWA’s Joseph Hazboun (in the foreground) describes life as a Palestinian Christian during a luncheon in Bethlehem. (photo: CNEWA)
Carl Hétu National Director of CNEWA Canada sharing stories from the Holy Land. Pope Francis touched the hearts of many people during his last trip to the Holy Land. One of them works for CNEWA in the Jerusalem office. Joseph Harzboun's family is amongst the 5 families invited to have lunch with Pope Francis. Here is his testimony. Text written by Joseph Harzboun.

It was like a dream... I felt I was watching TV... the pope was sitting in front of me at the table surrounded by five families from the various areas representing the Holy Land's indigenous Christian community as well as the hardships and difficulties we face under occupation. I felt it was inappropriate to speak in his presence. But the extraordinary circumstances - and my wife's elbow - brought me back to reality. Since I speak fluent Italian, I started by introducing the families present at the table to Pope Francis and gave the first opportunity to speak to a family from the village of Iqrit, which was destroyed after the 1948 Arab-Israeli War and its Catholic villagers were expelled when Iqrit became part of the state of Israel. A family from the Cremisan Valley had their land confiscated for the construction of the Israeli Separation Wall. They spoke next. They were followed by a young lady from the Gaza Strip, who explained the hardships of living under siege and prohibited from visiting the holy sites until they are at least 35 years of age - and only once or twice per year if they are lucky. This was followed by an intervention from the mother of Khaled Halabi, who has been detained in Israeli prisons for more than 10 years, representing hundreds of detained Palestinian youth. A young person from Jerusalem explained how he was caught up in the system and denied residency in Jerusalem and has no ID at all, although both his parents have Jerusalem IDs. His Beatitude, Fouad Twal, Latin Patriarch of Jerusalem, noted that this young person does not exist officially as he has no ID and no passport. After everyone had an opportunity to speak, I spoke to His Holiness about the hardships of the Christian community in Jerusalem. Seeing how affected he was at hearing all these tragic stories, pain and human suffering, I apologized to His Holiness and explained to him that being present as a representative of the Christian community of Jerusalem, I was obliged to complete the chain of personal stories about the sufferings and hardships of the Christian community. He was very touched by what he heard and expressed his interest in knowing the whole story. I explained to him the threats Christian families in Jerusalem face because of the family reunification law imposed by the Israeli Authorities, which prevents families from living together in their hometown of Jerusalem. He was so tender, so loving, so compassionate. My wife expressed to His Holiness how much we love him, how honored we all were to dine with him; he smiled tenderly. I seized the opportunity to tell the pope that I was practically one of his employees. I could sense he wasn't sure he actually understood what I said. So I explained to him that I work for CNEWA/Pontifical Mission for Palestine, a mission established in 1949 by Pope Pius XII to care for Palestinian refugees following the Israeli-Arab war and how we continue our services today because - unfortunately - the problem of the refugees has not yet been resolved. 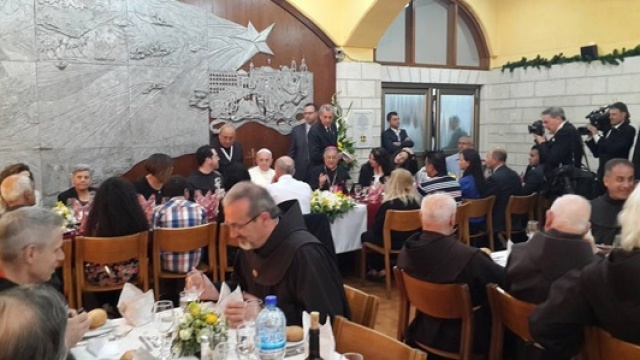 CNEWA was founded by Pope Pius XI 1926 and  works for, through and with the Eastern Catholic churches to identify needs and implement solutions.