Encounter with the World of Culture: The Pope calls for the broadening of horizons and human engagement

The Pope met with Portuguese  academics, artists and others involved in cultural work this morning at the Cultural Centre of Belem in Lisbon.  The Centre is the largest building with cultural facilities in Portugal. 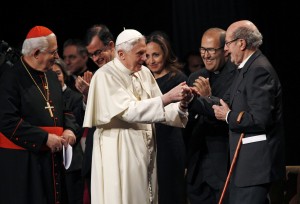 The Pope was given a brief musical performance and then greeted with a speech from Manoel de Oliveria, a renowned Portuguese filmmaker who is still working at the impressive age of 101 years old. Oliveira recognized that the culture of Portugal is deeply impacted by its Christian heritage, but that the modern day doubts and disbelief of the Gospel have affected Portugal's Christian culture. The Pope began his speech to the cultural representatives present by expressing his respect and appreciation for their work.  He thanked Mr. Oliveira for his kind words and for sharing his thoughts on the concerns present in Portuguese society today. He then went on to speak about today's culture.  The Pope said that the Church's primary mission in contemporary culture is to keep alive the search for truth and, consequently, for God and to lead people to seek the ultimate things that give life meaning. Here is the full text of the Pope's address to the world of culture. Prior to the Holy father's arrival at the Cultural Centre, he greeted youth gathered outside the Nunciature where he had been staying during his time in Lisbon.The official website for the Pope's visited reported that the Holy Father unexpectedly broke security protocol to greet several children. He exited his armored vehicle to proceeded to greet the children. The Co-ordinator  General for the Visit said that it was a complete surprise to all, describing it as 'delirium'  as people there rushed towards the Pope. 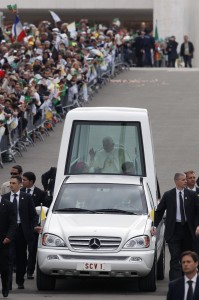 The Pope is now in Fatima where he will remain until tomorrow, May 13th. Join us for continued live coverage throughout the day as the Pope celebrates Vespers and later for the blessing of the Candles on the Esplanade of the Shrine of Our Lady of Fatima at 4:30 pm ET, 1:30 pm PT