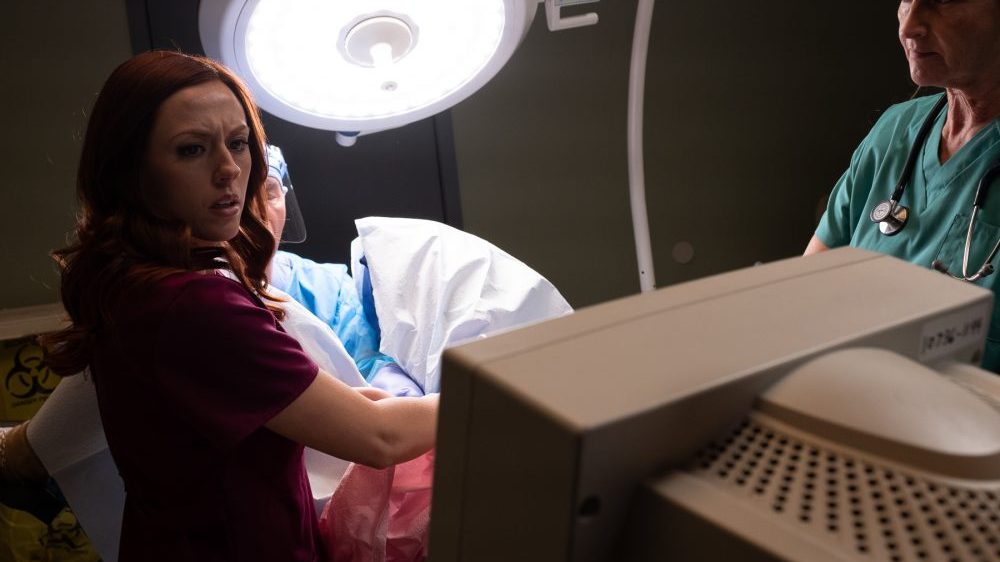 Actress Ashley Bratcher plays Abby Johnson in the film Unplanned. Image courtesy of Unplanned Film. https://www.unplannedfilm.com/
Over three months ago I had the chance to watch the film Unplanned, based on the story of Abby Johnson, the Planned Parenthood clinic director who had a conversion experience, quit her job, and has now become a leading pro-life advocate. I wrote about the film and encouraged everyone to go watch it. The film opened in theatres in the U.S. on March 29, but as of that date the film had not opened (and was not going to open) in Canada. The weekend it opened in the United States, the film earned an A+ CinemaScore and ranked No. 4 at the box office grossing more than $6 million. To date the film has grossed more than $18 million even though the Motion Picture Association of America gave it an R rating because of some graphic content regarding abortions that are portrayed in the film. I explained that in detail in my earlier post. Despite all this, distributors (and movie theatre chains) in Canada seemed to refuse to carry the film.

Pro-life advocates, including Abby Johnson herself, decried this refusal as censorship.

In April, a screening for Members of Parliament in Ottawa was arranged by the film's producers. In May, Abby Johnson was a speaker at the National March for Life, also in Ottawa, and that same month, another screening, this time in Edmonton, was arranged for some 3,000 Canadians, hosted by Harvest Ministries International. A boycott against the largest movie theatre chain in Canada, Cineplex, was called, and a campaign to bring the film to Canada began, including a petition to Cineplex signed by more than 100,000 people. Many who wrote to Cineplex received a response saying that in order for them to have the film in one of their screens, the film needed a Canadian distributor. The campaign continued, and it seems that it was successful. Independent distribution firm Cinedicom picked up the film and is distributing it across the country.

Unplanned will open in Canada on July 12.

Film creators Cary Solomon and Chuck Konzelman, (God's Not Dead, God's Not Dead 2, Do You Believe) said that “When Unplanned comes to Canadian theatres, this movie will make abortion unpopular. This is the movie that no one wants you to see and it took a petition, a boycott, and a brave independent distributor who would boldly bring this movie to the people of Canada.” According to UnplannedFilm.Com, Unplanned will be shown in Cineplex, Landmark, and independent theaters across the country. However, as I write this, when you go to UnplannedTickets.Com only theatres in a few communities are confirmed, mostly in the country's west, which probably reflects only the independent theatres and not Cineplex or Landmark. Landmark does not have Unplanned on their website, even under the "coming soon" listings. Cineplex has it listed as opening July 12. It's possible that we will have to wait until that opening week to see the listings and find out whether it will be playing in a theatre near you. I wrote last time that I believe this is a film that we should all watch. Don't watch it because it's a pro-life film or because you are supporting the pro-life movement; go watch it because it's a good story and a good film.  Parents, despite the ratings and the warnings, take your teenagers to watch it. Take your daughters to watch this film. Talk to them about it.

If the film is not coming to a theatre near you, you may want (and be able) to organize a theatre buyout. In order to do that, I believe you have to be able to pre-buy 75-100 tickets. For Landmark Cinemas, go to https://www.landmarkcinemas.com/advertising-corporate-sales/private-group-screenings/. For Cineplex, contact them at canada@unplannedfilm.com For independent theatre buyouts/group sales, you have to contact your local theatre manager directly.
If you are not able to organize a buyout, you can still contact your local theatre and encourage them to show the film. They responded to the boycott, and they will respond if they hear from a large number of people who want to watch a film. It's all about ticket sales after all.
And remember to check for updates as new theatres are being added daily at https://unplannedtickets.com.
If you haven't yet watched the trailer, here you go. See you at the movies on July 12!