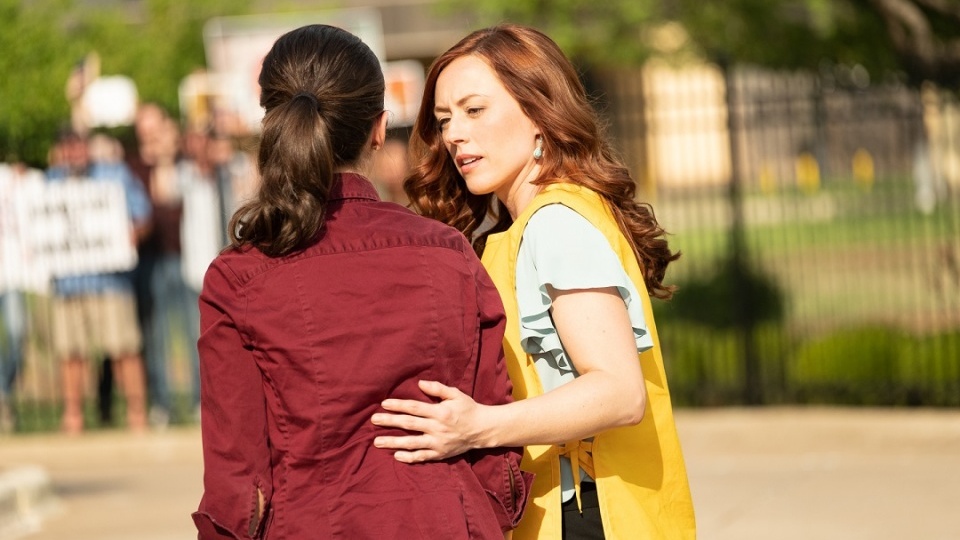 Ashley Bratcher plays Abby Johnson in the new PureFlix film by Chuck Konzelman and Cary Solomon, Unplanned.
I just watched the new film Unplanned – based on the story of Abby Johnson, who worked for Planned Parenthood for 8 years. She was actually the clinic’s director when she had a conversion and walked out, never to return. I’m sure many of you have heard her story. I remember when it happened some 10 years ago. I also read the book when it first came out. As one of the youngest Planned Parenthood clinic directors in the United States, Abby Johnson was involved in some 22,000 abortions and counseled hundreds of women on their reproductive choices. She explains in her book how her passion surrounding a woman's right to choose led her to become a spokesperson for Planned Parenthood, even fighting to enact legislation for the cause she so deeply believed in. Until the day she saw something that changed everything.

At least that’s how the film’s synopsis tells it.

The reality is that Abby’s conversion was a long process that began perhaps even before she first joined Planned Parenthood as a volunteer while still in college. I actually don’t want to say much about the film except that, in my opinion, this is the best pro-life movie ever made. I think everyone should go watch it. But don’t go watch it because it’s a pro-life movie; go watch it because it’s a great movie. It’s a great story – that’s ultimately what makes a great film. And it’s not just a story about abortion or one that reveals “the truth about Planned Parenthood”. Don't even go see it because it's the story of the 40 Days for Life Campaign (in some sense) or a story about the power of prayer. In reality, it is a story about how God works in our lives. It is a story about how nothing about God’s action in our life is unplanned.

We are very much part of His Plan.

“For you created my inmost being; you knit me together in my mother’s womb. I praise you because I am fearfully and wonderfully made; your works are wonderful, I know that full well.” (NIV)

We can read that verse and glean the pro-life message (as it is in fact used at one point in the film), or we can read that same verse as a testimony to God’s creative plan-making. I would add that God did not begin knitting you in your mother’s womb: God began knitting you hundreds of years ago, with every person whose choices resulted in the fact that you exist today: your grandparents, great-grandparents, their parents… all your ancestors. Everything that happened to them and every choice they made have resulted in who you are today. God was knitting you way back then.

And God continues knitting you through your choices and responses to what happens to you.

Today, when I write this, is Friday of the second week in Lent (year C), and the first reading is the story of Joseph. (Read the whole story in Genesis 37-45.) Joseph’s story is always used to show how God works his plans despite our circumstances and bad choices. Joseph was sold as a slave; he ended up in Egypt, ended up in jail… you know the story. But Jacob’s family would not have survived the famine had Joseph not interpreted the Pharaoh’s dream. And that would not have happened had Joseph not been in prison. It would not have happened had the baker and the steward not been in prison with him. Certainly, none of this would have happened had Joseph's brothers not sold him into slavery. He would not have been sold into slavery had he not been an annoying little show-off to his older brothers, or had Jacob not treated him a little differently than he did his brothers. On Monday, March 25, we celebrate the Feast of the Annunciation. We can probably say the same thing about Mary. God was already planning the salvation of the world, the birth of Jesus, with the birth of Mary. What were the things that led to Mary being where she was so that the Angel Gabriel appeared to her on that day? This may not be your experience, but I know that for many people, it is. Many of us (and I see this happening in my life more and more) see God’s hand working in big and small ways in our lives. Those of you who are interested in genealogy and know the story of your ancestors probably have a pretty good idea of how their lives and choices have determined who you are today.

And this, I believe, is the true story of Unplanned.

I won’t tell you more because I want you to watch the film, but it is exactly Abby Johnson’s story. Every choice she made, good and bad, every opportunity she accepted or rejected, was part of God’s slow and steady guiding her through and finally out of the abortion industry and into becoming one of the world’s most credible pro-life advocates. Parents: take your kids and watch this film (see note about R rating below). Teachers, encourage your students to go watch it. Preachers, tell your congregations to go watch it. No matter where you land in the pro-life/abortion spectrum, whether you are undecided or believe in choice, go watch this movie. Not only is it a wonderful contribution to the message of life but also a witness to the reality that God has a plan for all of us – whether we plan or not – God’s actions for each one of us are very much planned. Unplanned will be released in 1,000 theaters in the United States on March 29, 2019. Canadian release date is not determined yet. - A note about the R rating: Unplanned has been rated R from the MPAA, which is ironic given the fact that teenagers who can have abortions without their parents’ consent will not be able to go and watch this film without their consent or accompaniment. Abby Johnson wrote a letter to parents regarding this, and I would like to share this letter here:

I wanted to take a few minutes before my movie, Unplanned, comes out in theaters to talk to you. Mom-to-mom. Parent-to-parent. As you know, the movie received an R rating from the MPAA, and I imagine that may make you nervous about allowing your children to see it. Setting aside that, it feels a little weird to have a movie made about my life, and even weirder to be told that my life is “rated R.” I want to tell you, as a mother, what you can expect from the film: The movie does not have profanity. The Lord’s Name is not taken in vain or disrespected. There is no nudity, no immodesty, and certainly no sex or “suggestive” moments. None. So why the R rating? For two scenes. Two scenes that the movie team was determined to re-create accurately, at my insistence, because they are important for people to see. The first is a CGI (Computer-Generated Imagery) recreation of what I saw on the ultrasound screen when I assisted in the abortion procedure that convinced me of the humanity of the unborn. You will see what I saw: a baby on an ultrasound screen in black and white 2D. You will see the abortion instrument, which looks like a big straw in real life and like a dark line on the ultrasound, introduced onto the screen. You will see the baby struggle against it. You will see the baby first slowly, then quickly disappear into the instrument as it does what it is designed to do. It is important for you to know that this was a CGI recreation and NOT footage from a real abortion. But it sure looks like what I saw. I think this scene is so important for teenagers and older children to see because it tells the truth about what our culture keeps trying to insist is a “right” and a “freedom.” No one will be able to see this scene and then say they “don’t know” the truth about abortion. The second scene that was cited as a reason for the R rating is a scene that re-creates my awful experience with the abortion pill. Ashley, the actress who plays me, did a fantastic job capturing both my physical pain and my fear. I won’t lie to you; that scene shows some blood. In real life I hemorrhaged so badly I thought I was going to die. The movie captures that without being gratuitous or gory. I think the producers walked that line well. The rest of the film is not as intense as those two scenes. It will make you laugh, make you cringe, gasp, cry, and cheer- all the things a good movie should. The difference with Unplanned is that it has the potential to change and save lives in the process. So, should you take your kids to see this movie? I can’t decide for you, but I will tell you that my twelve-year-old daughter will see it. I can tell you my friends who have pre-screened the film plan on bringing their 10, 11, and 12-year-olds along with their teenagers to see it, and I hope you will do the same. Our children are of the generation who is being lost to abortion. This is personal for them, too. They are likely to hear and see more graphic content in most school health classes! I guess what I’m trying to say is, this movie is authentic. Yes, it’s a movie about abortion, but even more so, it’s a movie about the truth of forgiveness, repentance, and redemption, because that is what the story of my life is really about. See you at the movies. Sincerely, Abby Johnson